The force of brain injury can be determined on the amount of  impact with the head.  The forehead and scalp have an abundant blood supply and injury to these areas often results in bleeding under the skin. When the bleeding is restricted to one area, it causes bruising and swelling. Doctors refer to this as a hematoma.

As you will see with our illustrations and explanations below, to suffer brain injury there does not necessarily have to be impact with the skull.  Sometimes the force of acceleration and deceleration can be enough force to cause brain injury.

Brain injury can occur as a result of external mechanical forces, which are directed to the head and/or neck.

a) A significant blow to the head; 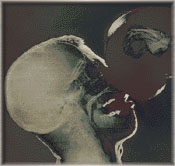 Examples of blows to the head would be those suffered in car accidents.  Seatbelts (if worn) may have curbed a lot of these types of injuries but they do not necessarily prevent you from hitting your head on the inside frame of the car or even the drivers or passenger side windows.  Blows to the head can also happen from falls, being struck by a blunt object such in an assault or running into object such as a sliding glass door.

b) The head hitting a hard object or something that will make it stop suddenly;

NEXT: The Internal Forces of Brain Injury.