Forces which Cause Brain Injury

Internal forces which cause brain injury within the skull, as opposed to the head impacting an external object, occurs when the brain hits the inside of the skull. Internal impact can occur without a blow or contact to the head.  For example  the acceleration/deceleration of the brain will be much greater with external contact, the brain damage is likely to be more severe in such case. 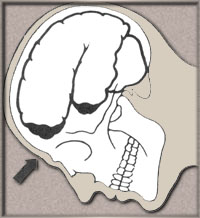 The brain is made up of many different layers or lobes, each which has a different density. Axons are long, thin neuronal fibers that criss-cross these layers. When tsubjected to acceleration/deceleration forces (even in whiplash), especially when such forces are centrifugal (rotational) in nature, the different layers are torqued at different speeds. This torque of these fibers can cause shearing.  Shear is the most likely mechanism of injury in an automobile accident, because of the rapid deceleration of the automobile in the crash. 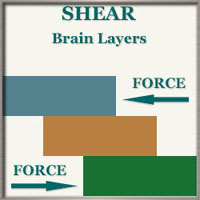