In Lethan part three we continue our discussion about the effects of brain injury, Lethan’s  pre-brain injury self and his memories or lack there of the accident.

“Who Am I, Again?” begins with Lethan waving au revoir to his French teacher in the rear view mirror, leaving the implication that this distraction caused the accident. But that is just the story.  Like all severe brain injury survivors, Lethan has no recollection of his accident in his pre-brain injury self memories.  Here is what he does remember of that day: 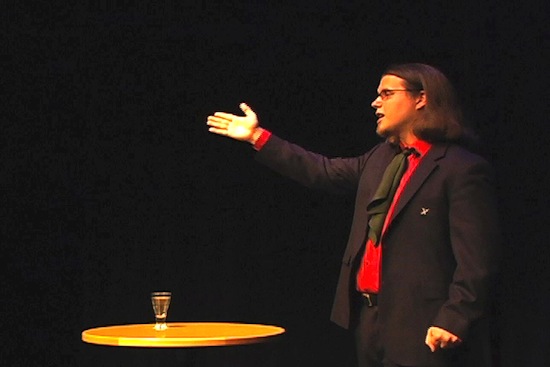 Lethan remembers waving au revoir to his French teacher as his pre-brain injury self.

What happened?  I had – it was actually interesting.  I had just gotten into a fight with my mother before I left to take my sister to the school.  I took her to school.  My last (pre-brain injury self) memory is exactly as I describe it in the story, waving goodbye to my former French teacher.

What happened – a car – I was on a back country road going back towards my family home and a car had just passed me and we don’t – no one knows the exact reason – probably a deer or it might have been I was going too fast and just lost control or might have been I swerved because of the car.  Any, any one of a million other possibilities, but somehow I swerved and hit a telephone pole.

I was Geisinger Medical Center for almost a full month and then when I – they finally felt that I was stabilized enough to go – my recovery was progressing quickly enough that I could go to a, a, a rehabilitation center, I was sent to McGee Rehabilitation in Philadelphia and I was there until December 23 and so that the – yeah, that’s kind of the main part and then the rest you hear in the story.

Lethan is not the only one who searches for an explanation in his own memory for what happens, and not the only ones who memories are enhanced by bits and pieces of information that he put together from other sources.  There is a brain injury term called confabulation, one we have discussed in other stories.  It is the tendency of the brain to fill in the gaps in the memory left by the brain injury, stories that make complete sense to the survivor, yet may have no connection to reality.  We discussed this issue in our story of Jeremiah at http://tbivoices.com/jeremiah2.php See also http://waiting.com/confabulation.html

It is likely that some of the memory of waving goodbye to his French teacher is confabulated, but most fascinating is the insertion of the possibility of a deer into his explanation the night of his performance.  The previous night in talking to Lethan about the accident, we asked him what happened.  He didn’t know – that was clear.  We asked him if there were deer near where it happened.  He didn’t know.  That is likely where he got the idea for the deer.

It is interesting that Lethan, who may not recognize the trait in his own story telling, gave such clear examples of it in his stories of others.  Tony starts his story about himself this way regarding his pre-brain injury self:

Yet, with equal certainly, Tony adds this to his story:

(I don’t) remember the day of (my) accident but ‘I do remember waking up at the wheel just before my accident actually happened.  See, I remember opening my eyes and seeing the front of my car smashing into that roadside embankment or the back wheels of my car that pushing forward which pushes the center of my car straight up which throws me straight up through the roof of my car, straight up into the air, straight up, up, up, up a good 2,000, 3,000 kilometers.

And I remember getting into a long line, but I’m about half way through so I don’t got too long to wait.  And at the front of the line there is this big man wearing this long white robe.  He was strong.  He was an angel and the angel looked at me and he tells me it’s not my time yet.  And I remember falling.  Remember feeling the wind rush past my cheeks as I was falling down toward the earth, getting larger and larger in my sight and I remember slamming into my body.  When I woke I had been in the coma for six months.

Lethan’s story of Sarah and her memories of the night of her accident with her pre-brain injury self:

I was moved to a large white empty room and there I had a long conversation with God and I lay my head in God’s lap and God told me that I had to make a decision.

Verbalizations about people, places, and events with no basis in reality. May be a detailed account delivered.

In trying to answer the question, I explained that the brain doesn’t know what to do with a blank slate of memory, especially about something as important as THE ACCIDENT.  Thus, it searches the bits and pieces it has been told about what happened and mashes that together with other information and creates what the injured brain sees as a plausible and detailed memory, that has no basis in reality.  Just as the universe abhors a vacuum, the injured brain abhors a blank memory and “digitally enhances” almost random information to fill in the hole.

The risk in digitally enhancing anything is that the computer assumes something that it has insufficient data organically was insufficient.   The computer in this case, an injured brain, is even less capable of inferring what missing data should be used for the enhancement.  The result a confabulated memory.  A memory of “talking to God” is not a religious or near death experience.  It is something truly fantastical.

Next in Part Four: Who Was Lethan Before