One of the most consistent complaints with brain injury hearing impact is in respect to distractions is background noise.  I discussed this with DJ: 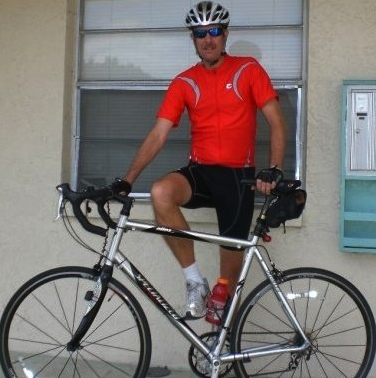 Despite ear related problems, DJ can still ride his bike

Now, we’re having this conversation in a room by ourselves.  We’ve had a couple of interruptions but nothing significant.  There’s a lot of background noise – that air-conditioning unit has been running continuously and it’s fairly loud and we’ll hear it on the tape.  Does that kind of background noise bother you or effect your brain injury hearing impact?

No, because it’s consistent.  It doesn’t go up and down. I have a white noise machine and it’s got the, the waves.  It does not stop the ringing in my head but believe it or not, that does.

You’re talking about the air conditioner?

If that wasn’t on – Heeeeeeeeeee.  That would drive me nuts.  We would not be able to stay in this room.

When you say “that” you mean the air conditioneror the fluorescent light?

The light’s fine.  It’s that noise is enough to stop me from hearing the ringing and the ringing in my ears is very annoying.  I sleep with a TV on every night.  I just, I have to have the noise.

Tinnitus, which could be  brain injury hearing impact, would be a term to describe that.  Talk to me about your tinnitus.

They gave me Lipoflavanoid in the beginning.  I would say, seven, eight months into my injury I just really noticed it one day.  I don’t think it just came on.  I think it was just so much going on and maybe my cognition wasn’t there but I just really started to notice this constant zinging, screaming, ringing in my head.  So they sent me, of course, for a CT scan.  They don’t see anything.  There’s no inner ear problems.  They send me to an ear doctor.  There’s no earwax or, you know, nothing wrong physically with the ears.  So, they said, you know, head injury, tinnitus.  And they gave me Lipoflavanoid.

I don’t want to say it’s a vitamin supplement but it’s, it’s a drug.  It’s on TV now but they, they’re advertising it for tinnitus but I think it’s more related to inner ear, like a vestibular problem where blood’s not necessarily making it.  It thins out the blood, I think.  That’s just not the problem.  I think head injury, tinnitus, tinnitus is a, a whole different world.

Have you ever seen a neurootologist to evaluate your brain injury hearing impact?

No, they scripted a neuro-ophthalmologist, now that you mention that because of the visual perception problems and dropping things and things like that and they couldn’t come up with that.  There’s some doctors that you just can’t get through workers’ comp.  They just, they don’t want the case.  They don’t want to get involved.  So some of those neuro type of doctors, uh, no I haven’t seen but, I’m not giving up that those can be seen.  Neuro-cardiologists, too, I heard.

As we discussed previously in Part Six, balance, dizziness, vertigo and hearing problems are very common after any TBI, even a mild one.  While ENT doctors have some expertise in this area, when the dysfunction has a neurologic cause, a more specialized doctor, such as a neurootologist to evaluate brain injury hearing impact is likely best. While such doctors are not plentiful, most states will have at least a half a dozen or so to choose from. For more on vestibular problems, see http://vestibulardisorder.com

Next in Part Thirteen – Medications and Headache after Severe Brain Injury