As we start Rita’s story we hear about the horrible accident that caused her catastrophic brain injury and how the system failed when she needed it the most.

Sometimes there is no audible voice after TBI.  TBI Voices has largely been a page about past miracles, about recovery, about those whose survival has far exceeded expectations. Even with those whose disability continues to be significant, we have been able to hear the voice, understand the disability, from the survivor’s own voice.

But of course, not all severe TBI recovery exceeds expectations.  Not all have miraculous recoveries from catastrophic brain injury.  Sometimes the miracle is simply in the faith that there is recovery to come.

Our story of Steven focused on the cracks in our disability system, where someone with a severe brain injury could be denied treatment because the economic incentives were counter to the goal of recovery.  But for Rita, the flaw is not a crack, it is a canyon.  For Steven, it was his superficial abilities that denied him care.  With Rita, it was the severity of her disability that got her parked, at a time she needed the care the most.

Another irony for Rita is that our treatment structure in catastrophic brain injury cases is so pessimistic, that we may not even know what works best to speed someone out of the earliest stages of recovery. You will not learn what works best when you try nothing. 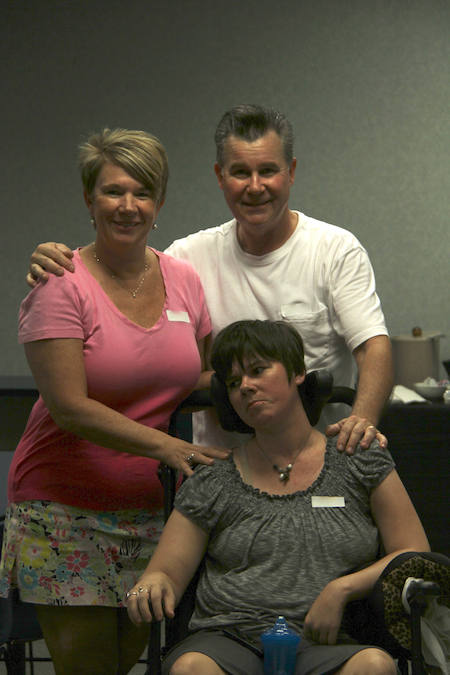 The accident happened two years ago.  While Rita can communicate, she does not do so well enough to video tape a conversation with her because of her catastrophic brain injury. Thus, what we will learn of her story is from her mother.

She was walking across the street with her boyfriend, 10:30 at night, and got hit by a car.  Apparently, there weren’t any witnesses, but the boyfriend actually did find somebody that actually heard a bunch of different stories.  The police report really didn’t do anything.  What we heard was… Well, we know the lady was 82 years old.  She did not see them.  Apparently, she left.  Someone, went and chased her down.  She came back.

The police said, you know, she was there.  I never heard any of that from the police really.  I got a letter from somebody a couple weeks later that said she was lying there in the middle of the road, people were passing by, and, you know, nothing was happening.

Was the boyfriend hit, too?

What about his injuries?

He broke his wrist.  He was like in the hospital for five days.  He’s  perfectly fine.

Was he knocked out?

Yes. He doesn’t remember it.  Yes, he was definitely knocked out.  Both of them were airlifted to, Bayfront Medical Center, which is about an hour away from here.

The accident happened where?

Right out here at the stop light; Foramore and U.S. 19.

What was the date?

This time it was a knock on the door instead of a phone call.  A knock that signaled that life as they knew it was over, not just for Rita but for both of her parents.  The only ones our current system can find to help Rita get better are her parents.