TJ talks about the other physical injuries accompany brain injury.  He had several broken bones along with some internal injuries.

Did you have any other physical injuries accompany brain injury?

Broke my nose, my jaw, top and bottom, three ribs, popped a lung and it caused the other vein to go up to my brain.

Mangled all the veins.

Did they have to do surgery for your physical injuries accompany brain injury?

I have plates, titanium plates in my face.

Michelle tells of the process of rehabilitation for the physical injuries accompany brain injury:

What were his physical deficits?

Oh well, he couldn’t walk.  His whole right side was definitely affected and he has tremors.  They’re different than seizures; his full right side and he was leaning forward a lot to keep them from happening.

Have they ever explained the pathology to you?

So he was getting physical therapy to help with this right-sided weakness?

Yes. They were getting him up to walk, but we were working on just the strength again in his right arm.  When TJ came home from the hospital he weighed about 125 pounds, so he was very, very weak.  He was very thin.

Did he look about like he does now before his injury?

No. Actually he looks very muscular today.  He does work out at the gym and which we’re very grateful for.  There’s a couple of very nice gentleman up there that have taken him under his wing.  It’s not easy to be friends with somebody with traumatic brain injury.  So, before the accident he looked like a short little fat Italian boy and now he looks like a nice beefed up Italian boy.  When he came home he was smaller than me.  I mean, there was nothing to him, so it was a lot of working the right side of the body.

One of our businesses is fitness equipment, so I mean, we had every little gadget you know, in demand. 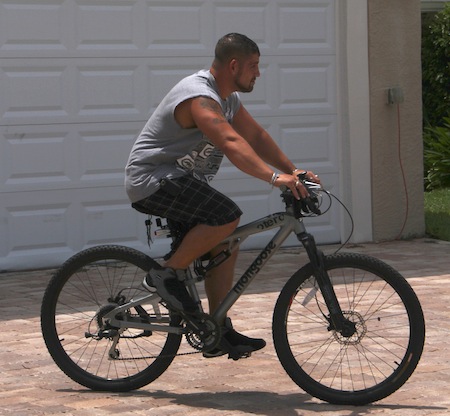 One of the things that people don’t anticipate is the weight loss for someone who is a coma.  But the amount of nutrition the body can get through a feeding tube, is usually insufficient to maintain weight. I asked Michelle about this:

You were at Spalding with other people and you’ve now worked with a support group for four or five years.  Tell me about what you can expect in terms of the physical changes, in terms of just weight and those kinds of things when somebody’s in a coma?

You’re going to see dramatic weight loss while in the hospital, but probably weight gain once they come home because there’s very little movement. You’re usually on a feeding tube in the hospital, so they’re going to lose weight.  They’re not eating.  A lot of the medications, the antidepressant medications will also increase their appetite, but they’re not moving; there’s no physical activity.  So, you have to do physical activity.

And again, what do you do? Just think about it.  I mean, reach a ball back and forth; any type of movement.  It doesn’t take a physical therapist to tell you what you should be doing.   Move their legs, do exercises with them.