In this part I talked to Jeremiah about his writing songs after brain injury. 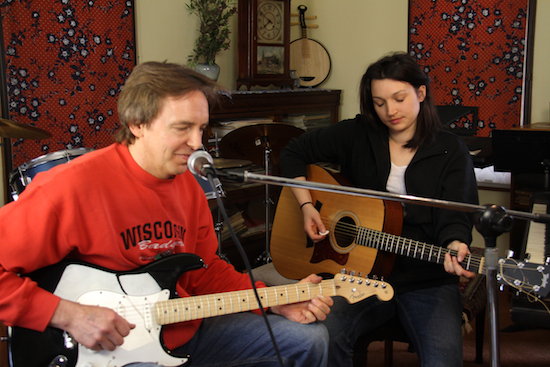 I asked Jeremiah to tell how music and writing songs after brain injury has helped him and the role it is playing in his life now:

Music, little tidbits of songs, not even songs – just notes and stuff that came into my mind as I recovered and I don’t know why.  As I progressed, probably five years after, I saw my guitar, my old guitar.  I had to get it fixed because I couldn’t press the strings down but I talked to my uncle and he said, you know, I also – he said I tried playing your keyboard because – and I hadn’t played those even much before my accident either, guitar and keyboard but if you can learn how to do that you might be able to move your fingers a little better.

So that’s what I did and then as I went on then music, songs, ideas came into my mind and so I’d write little bits at a time.  My first song probably I wrote for about six months or even – I still am writing on it actually years later but – or a year and a half or whatever it has been.

But what I then read last June was how Melody Gardot is a very – she’s a platinum singer; she’s platinum albums and she sings jazz and, and such but she had a brain injury, a traumatic injury.  She was a musician before whereas as I really wasn’t at all.  But then she became even famous, more famous.

Jeremiah played three songs after brain injury that he wrote, for us when we interviewed him initially and then taped some additional songs when we taped our interview with Sarah Pray, five songs in all.  All of his songs can be seen at the TBI Voices Youtube channel: https://www.youtube.com/user/TBIVoices

I asked him whether he wrote the songs after brain injury, too:

I rearranged music from a woman that I met on – it’s like a music – not a contest, but just a challenge to write music and so, I put my own songs on that.  And then, I noticed that she had something.  She’s from the United Kingdom and, and she’s a music teacher.  And, I just noticed one of her piano pieces that I liked and so, I asked her, you know, could I write something to her and she said sure.  “Can I rearrange it?  Yeah, go ahead.”

And so, I rearranged it and, and put it so I could fit my good verse. I wasn’t real good at verse chorus and stuff and Sarah kind of helped a bit on that on this.  But, but generally, I had most of it down so that I could present it to her and, and she actually – the woman in England wanted – that – me to try more quietly.  And so, we, we wanted to use a mic here, but that way I could sing it quiet.

The song he sang quietly was Ends We Can’t Undo.

With the songs after brain injury that Jeremiah wrote, the version he uses the mic, so he can sing softer: click here.