Brain Injury: The Unmaking of Cool

The unmaking of cool. Adults and non-conformists often ridicule the almost universal desire to be cool – to fit in – to be attractive to peers and members of the opposite sex.  Yet, this desire is at the core of our human development.  It is so much the focus of behavior and maturation in the years between 10 and 25, years where it is the frontal lobes that learn, evolve and create a pattern of behavior, motivation and personality which should last a lifetime.

It is often postulated that there is something unique about the neural matter of the frontal lobes that make them irreplaceable after TBI.  I am skeptical about such claims, believing instead that neural tissue in its virgin state is predominantly interchangeable, the technical term “plastic.”  My theory for the reason so much of the behavioral and higher functions of the brain are performed by the frontal lobes is that this is the largely empty portion of the brain’s hard drive when the brain needs enormous storage capacity to imprint the unfathomably complex program of “coolness” and then the end result – maturity.

Thus, on the day of Lethan’s injury, the program of “coolness” crashed and how brain injury not cool.  As his friend Ryan says in “Who Am I, Again?”:

It was just hard, you know?  We’re always being told ‘if he does this, do that; if he does that, do this.’  And it felt like babysitting, kind of.  And you never knew how you were going to act.  You would go from laughing to yelling, to laughing again real quick.  And the laugh it was this raspy, breathy, throaty sort of thing.  It was kind of scary.  It sounded almost like a donkey bray.  I mean, dude, we just wanted to hang out, you know?

In Lethan’s words about himself and brain injury not cool:

I remember being the Gimp.  That was my nickname given to me by my friends.  Gimp.  I couldn’t deny it.  I mean, I couldn’t talk right, I couldn’t act right, I couldn’t laugh right.  I was.  But at least I was someone.  At least I had a title and I had an excuse.  Whenever I screwed something up, I would say ‘hey, blame me, I’m a gimp, remember?’  And then they would laugh and I would bray along with them.  It was funny, I guess.

In my interview with him, he explained more about the bray:

The biggest thing was also my laugh.  I had – I would laugh uncontrollably at times, often with that donkey bray sort of thing because – that kind of  gaspy, raspy sort of thing and so that they started calling that hey, that’s the gimp laugh.

With Brain Injury Not Cool, comes the loss of  confidence in your behavior, even just after you have done something.  Disinhibition is often not the total loss of knowing what is cool, it is the loss of ability to stop the behavior, for example – stop the words, before they come out which is why Lethan believes brain injury not cool.  One of the worst parts of disinhibition is the realization, almost immediately, that you did it again.  What makes brilliant humor is in the timing, the nuance. Lethan describes that loss of confidence in his sense of timing.

Now, like we said before, Bloomsburg, it is a small town so that means that everybody’s all up in everybody’s business and so everyone had heard at least something about my accident and my miracle recovery and so as I finished my cross, the audience began to applaud for me.  Matter of fact, they stood up.  I got a standing ovation from the community?!  When I saw this my theatrical instincts, they took control, I turned, faced full front, bowed deep at the waist and they laughed at me.

And I remember thinking, ‘I made it.  Yippee!’  And I wasn’t proud of myself.  Why should I be?  The second half of my senior year had been a joke.  It must have been pretty funny too.  The audience had laughed.  I was alone.  I was tired.  I was afraid. 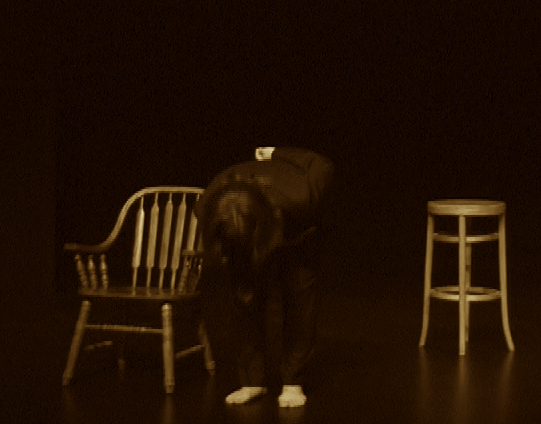 It may have been that there was no flaw in Lethan’s theatrical instincts, only his confidence in them.