The amount of skull that needs to be removed depends to a large extent on the type of surgery being performed. The bone flap is then replaced using titanium plates and screws or another form of fixation (wire, suture, …etc.).

There may be complications which may include seizures.  Because of this it is common to give the patient anti-seizure medicine for seven days.  Bacterial meningitis is also a known complication.  Pain may be a factor in post-craniotomy patients which can be managed through the use of scalp infiltrations, nerve scalp blocks, and morphine. 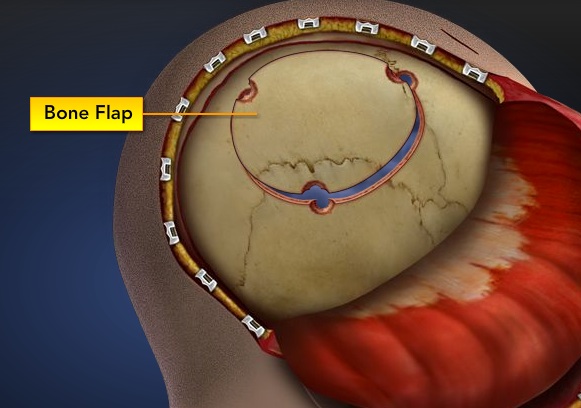 As shown, in a Craniotomy, the neurosurgeon removes a piece of the skull, the bone flap, in order to relieve ICP.

The next subject we will cover is Severe Diffuse Axonal Injury. Follow the link below.