Brain injury is caused by trauma, such as a blow to the head or a severe whiplash motion. Such traumatic forces can cause a defect in the neuronal integrity, resulted in the release of chemicals which are toxic to brain cells. Over time  neurotoxins increase brain damage.

The nervous system is the control center of the human brain especially the brain.  If exposed to toxins specifically neurotoxins the effect could mean neurotoxins increase brain damage.  This is because once a neurotoxin is presented it triggers a spiral effect.  It all starts with the cell and if the neurotoxin attacks a cell, specifically a brain cell all transmission can be interrupted or completely shut down.  If the toxin or neurotoxin(s) causes cell death the entire chain of the nervous system will either have to reroute or fail. This in return may cause brain damage that may be permanent.

The brain is there primarily to process information.  One processed it will send signals through the nervous system to trigger the correct response.  With toxins attacking the cells the information processed could become garbled and the signals that are sent out will not be accurate.  This could effect any part of the nervous system including, speech, hearing, etc.  Depending on what part the brain the toxins are effecting the cells in, they could cause a number of deficits either permanent or may eventually correct themselves.

The brain cell’s ability to protect itself from these toxins, is further reduced by other metabolic processes, that are set in motion by trauma.  The sum of such is an attack on the physical structure of the cell, which can result in delayed cell death. 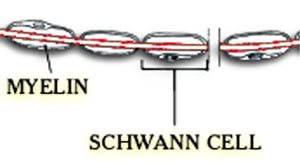 Axons have protective coatings, much like the insulation on an electrical wire, which is called myelin, or myelin sheath.