Blow to the Head Cause of Delayed Coma from Innocuous Initial

Much controversy in the field of brain injury swirls around the degree of an alteration of consciousness sufficient for the diagnosis of brain injury caused by a blow to the head.  There is virtually not a mild TBI that does not involve some issue as to whether the acute symptoms were sufficient to support the diagnosis of brain injury.  While DJ’s brain injury was severe, not mild, it is still an important illustration as to how seemingly innocuous blow to the head can result in potentially fatal injuries, ala, Natasha Richardson.  My questioning on this point beings with:

Let’s talk about the specific event where you suffered the blow to the head.  There’s a lot of controversy in mild brain injury literature as to whether or not you can have a profound injury (blow to the head) to your brain without a change in mental status.  So you’re on a boat, it’s bouncing underneath a bridge.  It bounces, you suffer a blow to the head on a piece of concrete.  From five seconds before, let’s say that happens, to a minute later, describe the events for me.

Not 100 percent sure, I know I hit my head that day, the reports say I hit my head that day, and it was around 4:00, I say 4:30, whatever.  I really, I don’t remember anything specific about that day, except I know I crawled up onto the, the form, it was metal strapping around the form that we had to dump the concrete in and I was literally straddling it with my feet.  I do remember that.  I do remember it being dark, so there could be a period of three hours that I may have zonked out, don’t remember.

Now if this were a MTBI, the presence of this period of amnesia as described by DJ would be sufficient for the diagnosis. The problem of course is that this description of amnesia is entirely subjective, based upon DJ’s own self report, of something he has no clear recollection of.

So do you remember half an hour before you suffered the blow to the head?

So, the story that you told us about being in a boat, going underneath the bridges, these are things you’ve learned from other people who were with you?

No, I remember being under the bridges and I also remember the storm coming in.  So I remember the storm coming in, and I remember it being very violent.  To this day I can see the lightening underneath the 405 Bridge going into Cape Canaveral Air Station.  I can still see the storm in my head, and it was violent, and we were being thrown around on that 27 or 30-foot boat.  I remember that, and then I remember a little bit later on literally straddling the form, on maybe two inches of steel.  Then grabbing for buckets and pouring them in to the form, to the point where I think we finished that particular pouring and it was at least 10:00 at night.

I do remember all of that.  I remember being dropped off at a restaurant outside of a gated community, I remember Diane picking me up, but as far as before the injury, it was, I don’t know, just construction as usual, and I do remember the storm. 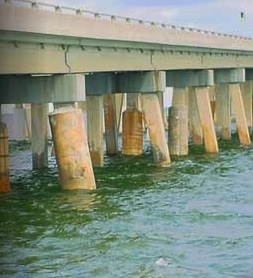 This is the bridge that DJ’s was working under when he suffered his blow to the head.

DJ’s recount of what he does remember, as disjointed as it is, is pretty typical for someone with some amnesia around the time of the blow to the head.  Looking back on it with a skeptical eye, as too often is done, is that there is apparent logic to what he does remember versus what he doesn’t.  Further, what he remembers is complicated by the years of focus on these events, trying to sort out what is a pure memory and what is reconstructed.

One could argue that this inquiry in DJ’s case is irrelevant because we do not have to deduct that he had a TBI, because he ultimately became comatose, for two weeks after the blow to the head.  Yet, one of the methodologies often used to measure the legitimacy of Mild Traumatic Brain Injury symptoms, is to compare them to severe TBI symptoms. With DJ as an example, as there can be no controversy about the severity of his brain injury, what we learn about some of the things he can remember during such period, does shed light on amnesia, for less severe TBI, caused by a blow to the head.

One could argue that the amnesia between 4:30 and 10:30 is anterograde amnesia to event one, yet I am not sure that is correct.  It seems more probable that it is the beginning of anterograde amnesia for the second neurological insult, the increase in intracranial pressure caused by the blow to the head.

One would think as important as amnesia is to prognosis, that these kind of issues would be delineated in the treatises – textbooks on neurology and brain injury. I have never found such a discussion in those texts, perhaps because historically so many people with rapidly forming ICP events like DJ, never lived to be questioned about the problems.

The bigger problem is that there is no systematic treatment of amnesia inquiries.  I wrote this initially before I looked at DJ’s records for the first 16 hours after his injury. At that time I predicted that there would be no contemporaneous inquiry as to what he remembers between 4:30 p.m. and 10:30 p.m. Upon reflection, I thought this question important enough that I obtained DJ’s permission to review and comment on his records for that period. Here is what I found:

Despite the 3 a.m.the next day diagnosis, there is no documentation that he was ever asked anything about his memory from 4:35 p.m. on the day of injury to 3 a.m. the next day.  Presumably, based upon the later coma and diagnosis of subarachnoid hemorrhage, his neurologic function was rapidly decreasing.  Yet, the documentation of this most critical measure of that decrease, the ability to form new memories, is missing.

The other thing of significance in what DJ does remember (to the degree we can assume that these are first hand recollections) is that the more exciting the event – other than the blow to the head itself – the more he seems to remember.  This would be consistent with a view that adrenaline/emotional content improves memory function, during an amnestic period.

So I remember the storm coming in, and I remember it being very violent.  To this day I can see the lightening underneath the 405 Bridge going into Cape Canaveral Air Station.

The contemporaneous amnesia inquiry in DJ’s case was quickly made a low priority by the diagnosis of subarachnoid hemorrhage. Yet that doesn’t reduce my criticism of the emergency room staff for not making and documenting these inquiries.  The potential for a permanent life altering TBI would have still existed, had the CT scan not documented the hemorrhage due to his blow to the head.  But then the presence of amnesia could have been a critical diagnostic finding.

Next in Part Three – Trauma System Broke Down Because of Hurricane