There were times in our interview that Kevin’s disability seemed quite significant.  His memory, his speech, his insight were often impaired.  Yet, that perception was significantly altered when I got him talking about his interests as a fan, of his two favorite Chicagosports teams and his spectator memory when it came to sports.  This phenomenon also showed up in my interviews of Doug, at http://tbivoices.com/doug5.php However, the contrast between other areas and his spectator memory was far more marked with Kevin than it was in the Doug interview.

To see how good his spectator memory was I talked about current sporting events. The day of our interview was on April 5, 2011, the day after Connecticut defeated Butler to win the men’s NCAA basketball championship, 53-41.

I see you’ve got a White Sox jacket on.

Are you a sports fan?

Were you a sports fan before you got hurt?

Do you have more time for sports now that you’re not working?

So do you watch the basketball game last night?

What’d you think about that?

It’s too bad for Butler, they were, the shots didn’t go in, they were cold.  And, and Connecticut they’re a good team but I wanted Butler to win.  But they were runner up last year you know and they just got nervous, not nervous but they, they got too tense I think.

Yes, yes they did.  And plus you’ve got the Badgers too.

Well did you want Butler to win because at least we’d (the University of Wisconsin Badgers were eliminated by Butler) have lost to the champions?

Yeah, yeah, plus I would like their, their teammates helped the, one of their teammates gets some tickets for their family to go and watch them play.  That was kind of cool you know and I don’t know if you had heard that, or heard about that part.

Nine of his ten brothers and sister were there, is that what you mean?

So your spectator memory of what happened yesterday is good.

This a good example of Kevin’s spectator memory. Kevin was quite accurate in his assessment of the basketball game. Butler shot the worst of any team in the NCAA Championship history and the score of the game was one of the lowest in recent memory.  Butler had been the runner-up in a much better game last year against Duke, a game that was decided on the final shot.

Do you have problems with forgetfulness?

What kind of things do you forget?

Yet your spectator memory of yesterday’s basketball game, which is now converted into some form of long term memory, is quite good.

How’s your spectator memory of the Packer football season?  Are you a Packer fan?

(The Green Bay Packers and Chicago Bears are geographic neighbors, being from the neighboring states of Wisconsin and Illinois and perhaps the bitterest and longest running rivalry in professional sports.  Last years season ended for the Bears when they were beaten in Chicago by the Packers in the NFC Championship Game.  The Packers went on to win the Super Bowl.  This author is a lifetime Packer Fan, as have been most of those interviewed up to this point for http://tbivoices.com as most of the interviews have been conducted in Wisconsin. Kevin is from Janesville, Wisconsin, near the Wisconsin/Illinois state line, the only part of Wisconsin where there would be any significant number of Bears’ fans.)

Kevin Gives an Example of His Spectator Memory

Well then I hope you have nightmares!

See, well see the reason the Packers beat the Bears that game is because Peppers did not hit the Green Bay quarterback (Aaron Rodgers) helmet to helmet.  No way.  I even got a picture of that too.  I know what I’m talking about.

Well they’re probably a few Packer fans who might disagree with you about that.

Rogers certainly did play worse after that though.

He probably suffered a concussion on that play.

I don’t know, yeah but it was, oh, no, I got a picture of that and his helmet didn’t touch, his helmet –

Oh, I have to look at that picture again.

Pepper’s helmet hit Roger’s right in the jaw, which is of course is worse than a helmet because you don’t have any of the protection of the helmet.

Whether he hit his helmet or not, your spectator memory of the game is good?

Oh yeah.  I even got it on DVD because I taped over.

So how did you feel after the Bears lost?

Down and out, I mean it took a couple of days to recover you know and I mean they had a great season I thought.  And they almost (went to the Super Bowl.)

They had a lucky season.

What do you mean lucky?  No!

The Packers fans always attribute all the Bears success to luck.

Now you’re upset, now you don’t want to be interviewed because I’m a Packer fan! 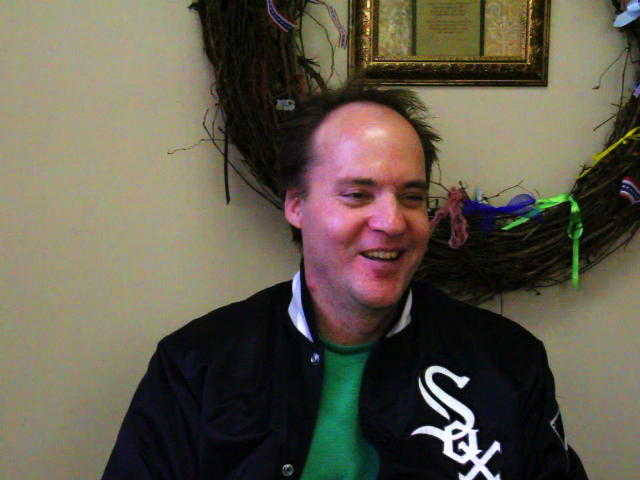 Kevin had no problems catching the sarcasm and humor of our Packers/Bears repartee with his spectator memory.

I got, I got a lot of friends that are Packer fans and boy oh boy, I got, I want to send a picture. It was legal. It wasn’t helmet to helmet.

Is your dad a Bear fan too?

Not really he, well his dad was a Bear fan.  And dad I think, I got a story about that part.  When we were growing up we lived in town here and dad, this is before cable, had an antenna put on his garage roof you know and he always pointed it to Rockford or Chicago, and we grew up on Rockford channels instead of Madison channels.

Now you’re about what 30 miles from the Illinois-Wisconsin.

So when you were growing up, you actually got White Sox and Bear games versus the Packers and the Brewers?

Oh yeah.  Right.  Sometimes like I was curious like when I was a kid you know I checked the like Channel 3, that’s the one the Packers be on and turn back to the Bear game and like who had a better uniform or, or stuff like that or better players like and –

Well the Bears were a lot better than the Packers when you were 20 years old.

Even when I was a young kid, too. Even when Mike Ditka was playing or Coaching, those were the days.

Why did I choose to include so much of this conversation about sports, seemingly having little to do with brain injury?  First, because Kevin showed considerable spectator memory and analytical skills in his recollection of both a game the day before, a game two months prior and a game a full year prior to our interview, than he did in general.  Second, Kevin’s interview sparked an idea which has been germinating for me in some form for more than 35 years.  I would like to see research into and the development of “spectating based cognitive therapy” or (“SBCT”) techniques, the use of a survivor’s intense interest in sport (or other activities) and their spectator memory to break through difficult cognitive rehabilitation logs jams.  (The term “spectating based cognitive therapy” or (“SBCT”) is my own ©2011, Attorney Gordon Johnson.)

Next in Part Eight – Spectating Based Cognitive Therapy