DJ explains the problems he has with his brain injury mood issues and the frustrations he had dealing with these on a daily basis.

I can easily tell you that.  Even losing dart tournaments so what?  You know, I lost races every time I ran because I never won a race.  I finished in the top ten but I wasn’t used to winning so darts never really frustrated me to the point where I’d jump up and down and get all ticked off.  You know, it’s frustrating losing because I knew I could do better.

Since I got hurt, you know, I want answers.  You know, I mean, lawyers, doctors, you know, the whole gamut.  I think you know our frustration a little bit from our side where, you get your pay dropped from temporary total disability to permanent partial and you’re making $150.00 a week.  Why?  What happened?  Well, we’re in the settlement process and, we’ll work it all out and everything.  Oh, you’re going to work it all out.  Great!  It was very frustrating.  I never got answers.  Like you said, there’s a lot of doctors that I could have had.  Um, nobody ever really explained to me the heart issues.  They just, well, it probably is related to your brain injury. Probably? 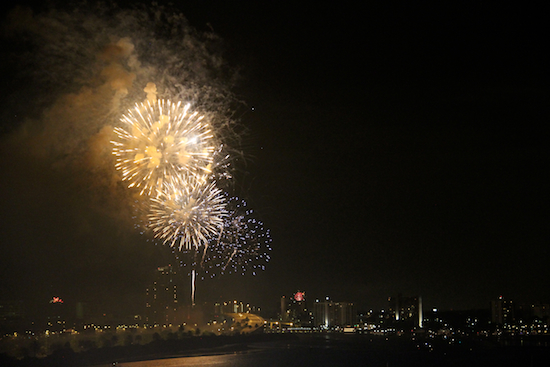 Despite the noise and the crowds, DJ was able to enjoy the 4th of July Fireworks, five years post injury.

I can say nothing today really has.  Everything’s gone pretty smooth.  The bus ride up here was okay.  One guy saw my TBI shirt and he had a scar all the way across his head.  I really didn’t want to talk to him because I wanted to stay focused with this.  Had he sat next to me on the bus, it may or may not have gone real well.  I might have told him, “Look, I got a very important meeting today.  I want to stay focused.”  That could have gotten out of hand.

Probably not but as far as irritability, now, I’m a little irritated about, the monthly struggle that, things like Social Security take a long time to get and all that but, uh,  you know I’m okay now.  I mean for right now, I think I’m okay because I understand a lot more about my injury.  I have a lot less pain because I’m finally building a team of doctors that understand what pain is after a brain injury instead of these knuckleheads that say, “What’s different?”  So, a lot of the irritability was erased by getting away from the so-called “professionals.”  I hate to say it but it’s just true.

You were talking about the 4th of July and fireworks.  Did that ever get to be too much stimuli for you with your brain injury mood issues?

It really didn’t.  I was outside.  There was many, many people sitting, standing, doing many different types of things.  Kids running around.  Honestly it was very relaxing to me.  I would say maybe two years ago, even three, I may not have been able to do that.  It has been a progression to, to be able to go out to malls.  I’ve been to a few Rays games in this area.  That can be a little tough because you got the, the organ going and the crowd cheering and, and you’re like uh, uh, uh.

These TBI support group meetings are important and this one used to be very good because it, it’s at a Health South and I learned that, hey, there’s other people going through Health South.  I’ve been through there.  And you just take your experience and you tell them, look.  They may not like going grocery shopping, even going any more.  They may not even want to get up and take a shower.

I understand these things.  I mean, I had no problems getting up, being motivate, motivated enough to come in here today, but I mean if you called me tomorrow and say, you know I’d like to ride bike with you on the trail where I live, I’m going to tell you right now that’s not happening.

So, to help somebody else integrate is to first understand you’re not going to be what you used to be.  Don’t even think about it.  There’s a young kid, 20 years old, right now in Arkansas we’re working with and he’s really struggling with it.  He’s got no money for rehabilitation.  The car accident didn’t help him produce anything with insurance or anything but he’s having a tough time with his family.  What helps me is giving a call down there or using Facebook and letting, these kids know or, fresh brain injuries or family members that come on, you know.  We’re all in this together.  Don’t be afraid to ask questions.

DJ has done an extraordinary job dealing with his brain injury mood issues and I am sure is tremendously helpful in the brain injury survivors community.