Brain Injury Caregiver:Standing by Your Man After Severe TBI

TBI VoicesBrain Injury Caregiver:Standing by Your Man After Severe TBI 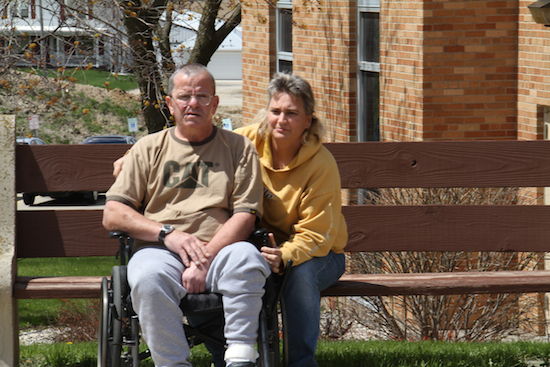 I accepted her invitation as Mike’s brain injury caregiver, to meet her husband, but was a bit unsure whether interviewing someone who was still in rehab was quite right for our project.  When I met Mike, I was even less sure whether he was an appropriate interview subject because he was still profoundly impaired and had a difficult time communicating.  However, Mike’s wife, as his brain injury caregiver, was so committed to telling his story, we set up the interview.  By the time we worked out the logistics of interviewing someone still in a rehabilitation unit, Mike’s recovery had progressed to the point that he was a good interview.  As expected, his wife was wonderful interview.

While confused about it the first time we met, by the time of our interview, Mike had been able to piece together what had happened to him.  He explains further:

I remember going down to the corner bar, going in there and having a couple of beers.

Now you do remember that in your own memory not from what other people have told you?

When did you realize that that isn’t how you got hurt?

(Because the injuries) didn’t match to a chainsaw blade.

What day of the week did you get hurt?

I believe it was a Saturday.

Was it Labor Day weekend?

On September 1, 2010 he came home from work, he had gone to work the night before and came home in the afternoon.  It was nice out, and we planted some shrubs and he got some corn.  We were going to go camping.  It was  Labor Day weekend, and he was busy around the yard and I left to go to an appointment I had at approximately 5:30 p.m.

I went to my appointment and I was left my appointment about 20 after 7 and I got a message that he had been in an accident.  I said ‘how could he be in an accident, you know, he was home from work and everything”. Then they said they had to call the Eagle 3, the med flight and, and take him to Green Bay and I just kind of flipped out.  I’m like ‘what?’

So I asked where did it happen and he had gone down to the local bar which is about a half mile away and he had a couple beers there and he had his two beers, gave away his free coupon ticket.  He said he had to go, somebody must have bought him a beer and he said no I gotta go, wife’s going to  be home, we have to eat supper.

The next thing I know is I got the message that he was in an accident and they found him upside down on his four-wheeler outside of the bar.

He was lying on the ground and his four-wheeler was upside down on him. Nobody has an idea (who hit him) or how long he was out there.

Did anybody ever do any investigation as to what happened in the accident?

Nobody seemed to know.  I did hear of things that a car had pulled in there and hit him, but you know, I, I really, I don’t know.  There was no camera surveillance there but there was a business across the street.  I, myself went over there to see if they had surveillance and they didn’t.

How far from the bar was he?

He only was about, I don’t know, maybe 40 feet.  It wasn’t very far for him to get going and turn over and it’s a big machine.  It’s a 650 and it’s heavy duty and I don’t, nobody really seems to know.  I did, yes, talk to a couple people and they said as long, if I couldn’t prove that it was injury on their part, that they caused it, there was nothing that we could do.

Next in Part Two – In Search of Her Comatose Husband