His whole body was swelled up.  His chest was totally black and blue for actually three months.  He fractured the whole side of his face and his jaw.  His right eye was swelled right shut.  It was just, it was, it was very, very bad.  They had his head wrapped every day with layers and layers and layers of gauze.

I didn’t know if he was going to  be able, if he was going to  be able to see because I knew that (the doctor) had said the part of the brain that they took out was for the left side, so I was just hoping that he could at least see.  We wouldn’t know that until he, could talk and tell us what he could see because the one side was swelled right shut.  I thought that that was probably damaged and it wasn’t going to  be any good and, you know, just worrying that the left side wasn’t going to  function right (due to TBI physical limitations). 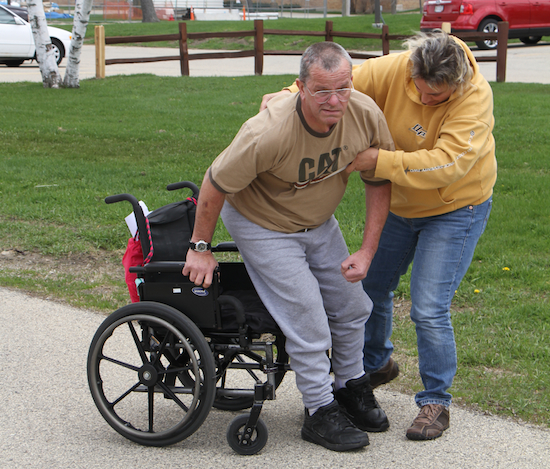 Mike is still in a wheelchair due to injuries to his brain and his TBI physical limitations.

He had the TBI physical limitations but he also, as you said, hit his head, fractured his face.  What, tell me about the non-brain injured parts of his injury.

He just had, he broke his clavicle.

The right side.  And actually, I didn’t know that until about four weeks, three, four weeks into that until he went down to rehab.  He had a trach and his trach started moving way off center, and then the lady in rehab the first day said it looks like he’s got a broken clavicle.  And they went and looked in the records and they said yeah, and then they told me he had a whole fractured face and everything, which I did not know any of that.

But they knew that when they did the surgery?

They knew that, yeah.  They had scanned everything before I had gotten there that day because they didn’t know anything, and he has a bunch of scars.  Actually, he had an aneurysm where they opened his whole stomach, and actually when Mike was like 21 years old he actually had cancer, so he had scars and tumors removed and they, you know, scanned everything because they didn’t know what was with him with his body all scarred up.

They did everything because I got the bills and things that everything was done up.

When he was in a deep coma they weren’t worried about the clavicle?

No.  They never did do nothing for it.  They said long as it didn’t move, you know, it was always in the same spot.

Now, Mike’s currently in a wheelchair.  Is that because of the damage to his brain?

Tell me about the TBI physical limitations he has right now.

He needs help walking.  He is now right handed after being left handed for 51 years.  He wears glasses all the time now.  He never wore them before all the time, but he wears glasses all the time so he can see.  He needs help getting dressed and bathing and putting his shoe on.  He’s got, he had a bad ankle to begin with, but it’s gotten worse because he wasn’t able to use it for the first two months.  He’s gotta have special shoes because he’s got a brace on his left foot that has to fit inside of his shoe.

He’s, as far as his brain, I personally think he’s almost all the way there.  He might even be a little sharper now than he was.

Yeah, I’m thinking so.  He’s full of humor now.  He never had all this humor he has, but it’s been the best therapy that I had.  It got me through this, and I’ve been with him for the last eight months right at his side.

Next in Part Eleven – The Road of TBI Rehabilitation Begins at St. Vincent