Abraham Lincoln is one of the most well-known U.S. presidents of all time. There is one detail about his story that is not that well known. When he was ten years old, he was kicked in the back of the head by a horse or a mule. Consequently, he suffered a traumatic brain injury.

One night, when he was about to go to bed, he had a vision of two faces facing each other reflected in the glass across from his bed. The faces were both of him. While one was normal, the other one was grey. He would speak about this vision he had several times during his career.

A psychic supposedly predicted that this vision meant he would be elected to two terms as President, but he would not survive his second term. Although this could be truly paran 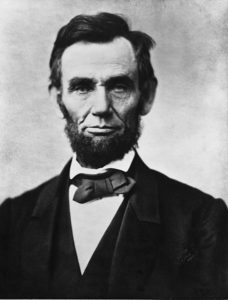 ormal activity, it’s more likely that his traumatic brain injury caused him to hallucinate. (Of course, there are many other legends of predictions of Lincoln’s death, including the famous curse leveled by the Prophet on General William Henry Harrison after the Battle of Tippecanoe.)

Lincoln also suffered depression later in life, called melancholia, due to his TBI. The injury also probably caused Lincoln to have a lazy eye. He sometimes experienced double vision. The shape of his face was also impacted. The left side of his face above his eye was rounder, thinner, and set back more.

He was still able to go on to be one of the most important presidents in American history. We hope that this story will help you feel less alone. Even the president of the United States had suffered problems from brain injury. If anything, this is a story of hope for those who suffer TBIs. The injured Lincoln did not even have all of the medical advances that we have today. The modern world has seen the helicopter and advanced imaging of the brain help people receive the quickest and best treatment possible.

Of course Lincoln is not alone in being a famous world leader impacted by brain damage. Brain injury is as ancient as the skull and has always impacted a significant proportion of the population. When national leaders ascended to those positions by combat, the chances they would have a history of brain injury escalates. And then there was Henry VIII of England.

Learn about another famous person from the same period of history that also suffered a TBI here. Learn about a significant case in the life of Lincoln here.