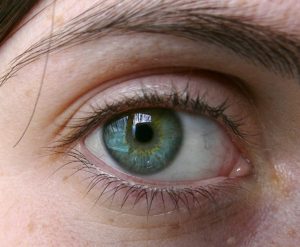 Screening for mild traumatic brain injury can be as simple as a ten-minute eye exam. (Flickr / Creative Commons / Emi Jane)

Many mild cases go undiagnosed as oftentimes people focus on severe and moderate brain injury. This kind of test could aid medical professionals in diagnosis of mTBI. Approximately 30 areas of the brain and seven of the 12 cranial nerves deal with vision, so it’s no surprise that a patient with a TBI would have visual problems. These problems might include papillary deficit, visual processing delays, and impaired oculomotor tracking and related oculomotor-based reading dysfunctions.

Researchers looked for potential biomarkers that could signal a mild traumatic brain injury. They decided to look for binocular eye movements (versions) and disconjugate movements (vergences). The test is only ten minutes long, consisting of three eye measurements and one visual symptoms questionnaire.

The study focused on 87 men and 21 women who experienced a mild traumatic brain injury or concussion in the last 72 hours. The subjects were active-duty military personnel. The control group was age-matched with people who had no history of head trauma.

The researchers measured papillary light reflex to a stimulus with monocular infrared pupillometry. This reflex controls the diameter of the pupil in response to light. They also measured near point convergence and saccadic eye movement function.

This kind of test is relatively easily taught and inexpensive and will provide a simple test to detect mild traumatic brain injury. This could hopefully help with all of the mTBIs that go undiagnosed. It would hopefully allow for more people who suffer from mild traumatic brain injury to get into treatment immediately. Just because an injury is labelled mild does not mean that there are not adverse symptoms that lay ahead in the future. This test could hopefully aid in the process of getting these people treatment and preventing complications after the fact. For a deeper analysis of this eye test, click here.