One Woman’s Memoir about Brain Injury 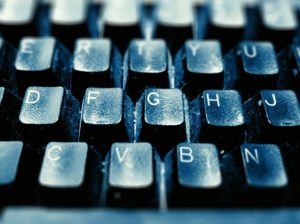 Sara Lewis had to put her fingers to the keyboard in order to think through her brain injury. She has her own memoir about brain injury to show for it. (Flickr / Creative Commons / Marcle Casas)

In 1977, Sara E. Lewis, 22 at the time, was in a motor vehicle accident. It was the last day of classes as a senior at William and Mary College. She was accepted to graduate school and was doing clothes shopping as a result. Driving home, it was late and raining. She went through a red light in her baby blue Volkswagon bug and hit the side of a Buick. She was unconscious and had to spend time in the intensive care unit.

She didn’t know she was still dealing with the effects of her accident until she went back to school in her fifties for a degree in communication disorders. This is when she realized she was still having complications from her brain injury. Recently, this sparked her interest in writing a memoir about brain injury called “Not What I Expected: My Life with a Brain Injury (I Didn’t Know I Had).” She said she had to go back to the beginning of her story and talk it out before she could move on. “It just crushed me to think I had been living so long with a brain injury and stubbornly trying to deal with it instead of understanding it and being able to accept it,” she said. “And so I had to write it down. I had to figure it out.”

Throughout life after the accident, she experienced deficits with executive functioning. Many times she was unable to think clearly, fluidly, and rationally. Many times she let her emotions like anger and sadness get the best of her. “When I look back on things, that brings me the most anguish, when I have been impulsive, angry, emotional when I shouldn’t have been,” Lewis said. “It’s cost me friends and jobs.”

In addition, Lewis has experienced a lot of physical pain. Being in pain also sparks uncomfortable emotions like anger and sadness. She said she was searching for a magic pill to cure her brain injury, but such a thing doesn’t exist. She found comfort in doing yoga, mindfulness, and meditation more than taking a pill.

Lewis also said that writing the memoir about brain injury was therapeutic. Although the first draft came out with self-pity, the editing and rewriting process helped her get rid of the self-pity and move into a place of acceptance. “It was just a huge burden lifted to complete that book,” Lewis said.

Lewis’s story is similar to what Attorney Gordon Johnson, the founder of the Brain Injury Law Group, S. C. experienced, at the same age in his life. See this YouTube video: