Continuing Brain Injury Recovery from the Severest of Impacts

TBI VoicesContinuing Brain Injury Recovery from the Severest of Impacts

Poetry has been a part of my brain injury advocacy almost from the beginning. There must be something about having to struggle so hard for words, that creates a hyper-appreciation of words – lyrical use of words, in certain TBI survivors.  Further, poetry, rhymes, introspection about brain survival –  seem to create a bond interconnecting the brain injury community.  The story of Jeremiah has made me pause – to think, to research, to brainstorm with experts in the field – as to why words and music have this power in continuing brain injury recovery.

Jeremiah is a severe TBI survivor and with his continuing brain injury recovery turned to music and lyrics to help him with severe memory and aphasia (speech problems).  As he said: “I figured out ways to try to think of names, but it was typically with a set of a rhyme so I put everybody’s name together.”  This later led him to start writing song lyrics in his continuing brain injury recovery. 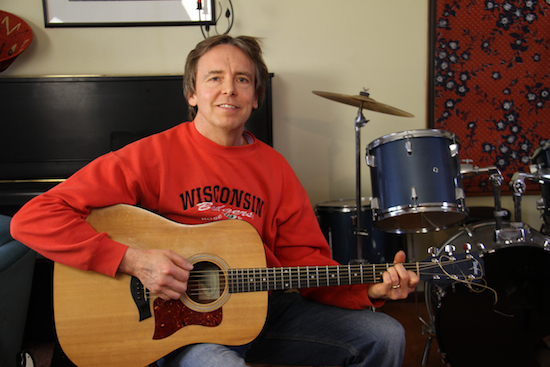 For Jeremiah, music and his guitar have become a prosthesis for his injured brain.

With Jeremiah’s continuing brain injury recovery  combined his fascination with rhyming with an old interest in the guitar in ways that rehabilitated not just his memory, but vast portions of his brain, his nervous system and helped him regain substantial use of the right side of his body.  Post accident, Jeremiah was partially paralyzed, couldn’t walk, properly name or remember people or objects.  Today, he not only writes songs, he performs those songs, with others, while playing a guitar with both hands.   Jeremiah has reached these milestones, all in the face of a rare speech syndrome – Dysprosody, also known as pseudo-foreign dialect syndrome and serious hearing and inner ear deficits.

With brain injury, themes often repeat themselves. In our story of Helena, she told us that despite her severe brain injury, she in her continuing brain injury recovery  “still had music in me.” http://tbivoices.com/helena7.php For Jeremiah, a person who had lost the music before his injury, music became the prosthesis to help him find his way back.

Jeremiah was injured in a single vehicle motor vehicle accident on October 6, 2003 when his car struck a utility pole.  At the time he was 43, married and working as an engineer.  He explains what he knows about what happened to him:

I was traveling to work to start the first day of my fourth week of a new engineering position and I had to do work at home and so I had a work computer on the seat next to me. As I was driving along, the computer started to shimmy off of the seat and I reached over to stop it from falling.  When I did I must have gone on to the shoulder of the road and then when I tried to get back on to the road over corrected and my car spun, I guess, 360 degrees on its wheels, it smashed in to telephone pole going about 55 miles an hour, was the speed limit, and it smashed the passenger door, which hit the pole right up to my seat.

And, then stopped me from going that speed as well and smashed me in to it.  I have airbags, front airbags, which probably didn’t do a lot – hit the side and then the seatbelt and it, it damaged me very brutally and, broke the telephone pole off 8 foot up. It actually knocked the power out to our home.  I was probably 2 miles from our home where it happened.

I suffered a brain injury many other injuries.

What were the specific areas of damage to your brain?

Well the frontal lobe, of course, was damaged but, it sounded like all over was damaged.

Did they do brain surgery?

Oh yes.  I think did it twice. We met the brain surgeon once a bit after but, I don’t remember exactly when that was, but – he – yeah we only congratulated him and he just said he was just doing his job.  But, he didn’t – I don’t believe explained to me, maybe he did, but, I can’t remember him explaining to me.  Oh, I do know what they did was they stopped swelling in the brain was one big thing.  They didn’t, they didn’t do anything odd I don’t believe beyond that.   I believe that they may have drilled in parts of the skull, but I think that what they did is pieced it out and then pieced it back together and stapled it.

Next in Part Two – Amnesia From Severe TBI