I take Tramadol for headaches, prn as needed.  Um, the Synthroid 75 milligrams in the morning, every morning, B12.

What’s the Synthroid as a brain injury medication for?

Synthroid is a hormone replacement.  They just found my thyroid to be just sky high like 7.49.  So they want to get that down.  I’m either using too much hormone or not enough.  I can’t remember what they said but with the number being way too high, I’m thinking I’m using too much.

What other brain injury medications?

Rozerum is a sleep medication and I can fault myself a little bit last night for not taking one of those but it might have taken me past 5:30.

Rozerum prescribed as brain injury medications is a sleep aid?

It’s the pharmaceutical melatonin.  That’s all it is. It’s not Ambien or Lunesta.  I’ve had both of those, too.  It’s only 3 milligrams and, I’ll be honest with you, buy a bottle of melatonin.  It’s the same thing.

What other brain injury medications are  you taking?

Tramadol.  It seems like there is one more. The Tramadol’s for headache and I got a lot of relief at a chiropractor’s office last summer for that.  I could take two to six Tramadol every day.  I have pain a little right here on my scapula.  There’s always pain.  But, you know, I’ve just gotten to a point.  If there’s always going to be pain, then why even bother?  I mean, you’re going to take these pills.  They cause stomach -they can cause liver problems.  They’re toxic.  They don’t completely drain in your system.  They sit in your liver.  I’m not a big fan of pills. 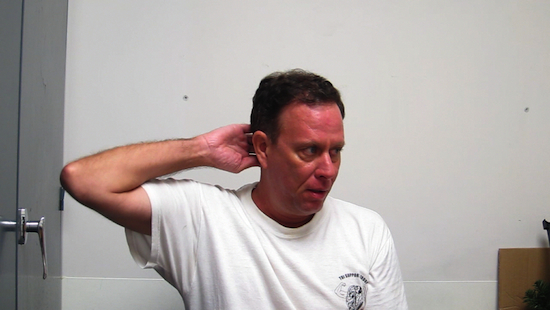 Talk to me about your headaches.

Headaches are generated, I believe, from the occipital area and I think that’s where the brain bleed came from.  They start here and they slide all the way up through (indicating the middle of the top of his head.) Sometimes they’re on the shunt line.  I can get pain right out my eye socket.  My neurologist has pretty much confirmed this.  He said, “Yeah, I mean, if you had layering along the posterior fossa and brain stem,” and he really believes that this is where all of the pressure and the pain came from.  So, when the massage therapist did her work last summer and the chiropractor did their work, they concentrated basically from the scapula on up and then the pain management doctor shot me up and, well, the same as all the other doctors.  He shot me up on a C5-6 to T1-2 area.

What’s their theory as how the injury occurred there?

Cervical stenosis related to head trauma where it –

Basically pressure straight down the top of your head?

Right.  Cervical stenosis takes the gap of the discs and it, it shrinks it’s margin and when that happens the water can no longer go through the disc and stay moist and keep the discs so that becomes degenerative discs.  The discs grow what’s called disc osteophytes, which are like little thorns and then the thorns start poking on the cord and it feels likes there’s a fork just stuck in my cervical spine.

Is it on the cord on or on the nerve roots that come off of them?

Has your neurologist described what you have as migraines?

Do you get any sort of aura or warning that they’re coming or any sort of visuals, um, phenomenon with them?

I wouldn’t go as far as a visual phenomenon.  Before the chiropractor, if my neck made that snapping noise, my head would really start to hurt.  The other thing is coughing as opposed to sneezing.  I can sneeze eight, ten times.  It won’t hurt my head.  One cough sends a rocket of pain right through my eye sockets.  I mean unbelievable.  Why coughing and not sneezing, I have no idea.

Why Brain Injury Medications May Not Be Prescribed

Pain is one of the most overlooked issues after TBI, with headache being the single biggest part of that. Pain is doubly troublesome for survivors of brain injury, because pain is one of the biggest drains on attentional reserves, the brain’s RAM as discussed earlier.  While anyone’s cognitive functioning will be negatively impacted by pain, when a brain’s RAM is compromised, pain may leave the survivor with no options but to shut down.  For a TBI survivor, shut down often means stay in a dark quiet place and wait it out, without being able to sleep, because of the ache.

Next in Part Fourteen Fatigue and Day to Day Functioning