DJ’s co-morbid alcohol use should not complicate the diagnosis of a severe brain injury.  As our brains are essentially all that we are, it is hard to argue that anything is completely irrelevant to assessing the nature of dysfunction after brain injury.  This fact, however, has been greatly distorted by the insurance industry as they misdirect the post-morbid focus from the big picture issues of organic changes in the brain, in an effort to find character flaws in the injured person upon which they can blame all subsequent disability.  Anyone who has ever been involved in a brain injury claim knows the truth of this statement.  While there are situations where prior co-morbid alcohol use or drug use could contribute to the post injury challenges, not even in a mild brain injury case can co-morbid alcohol use ever be the proximate cause of the disability. 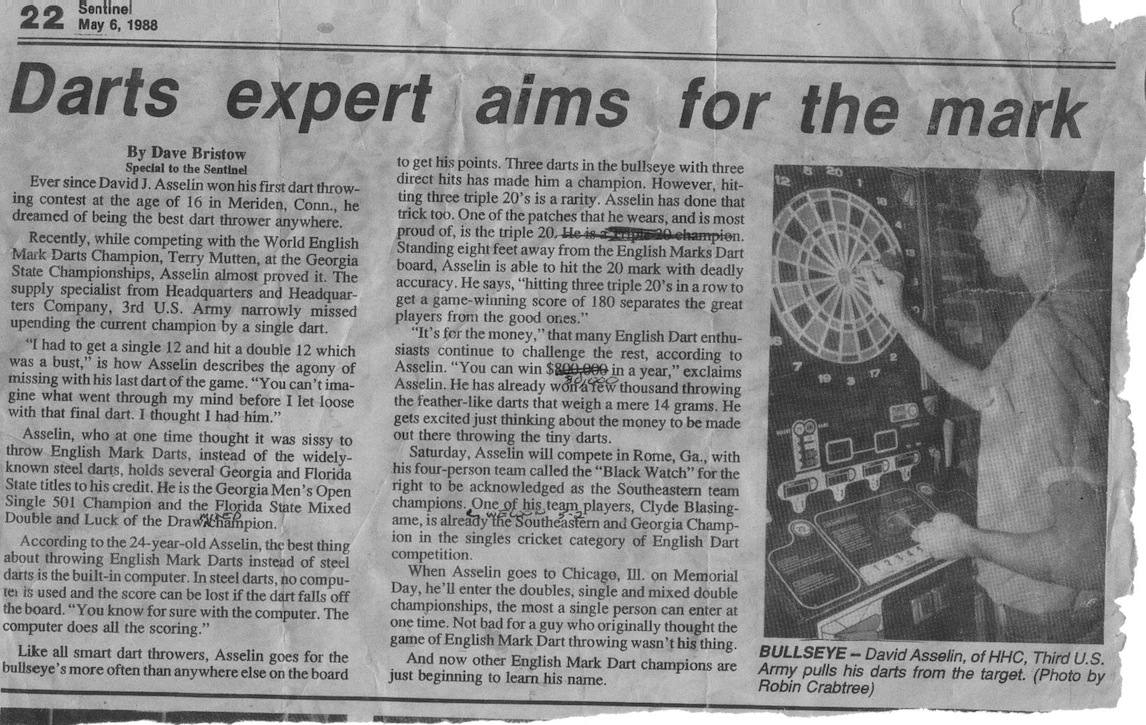 Co-morbid alcohol use or drug use does make the injured person more vulnerable to the synergistic crush of deficits that come from a TBI, yet that only increases the disability.   DJ was very frank with me in discussing his history of DUI’s and his co-morbid alcohol use and while I found them largely irrelevant, upon reflection I thought it appropriate to include that discussion in this treatment. I pick up the interview at that point:

Over our break, you actually were giving me some more background interest in darts and how it unfortunately interfaced with this concern about co-morbid alcohol use that was raised in your treatment.  Now, you were extraordinary dart player, is that correct? Tell me about that.

(At) about 18 years old got a little bit more serious, started playing on an A-league team and then drinking started to come into that.    I didn’t get in trouble until I was about 20,   and actually had a DUI dropped because I was going in the military.  The judge looked at me and said, “Get your butt out of here and do the right thing.”

Then you ultimately had two DUIs because of your co-morbid alcohol use?

While you were still in the military.

Still in the military and that was the accident that caused this little bump and three or four stitches.

You had a, a blow to your head in a car wreck due to his co-morbid alcohol use where you hit the steering wheel but your recollection is that you did not lose consciousness?

No, I didn’t. I got out of the car and shortly after that ambulance and police were there.  I still remember it.  It was a Saturday morning.  It was very hot in Forest Park, Georgia.  I had stayed out a very long time.  Went to a friend’s house to stay there but there was too many people and I just decided to go.  I thought I was fine.  I hadn’t drank in four or five hours but still over the legal limit.

I fell asleep and then I woke up in time to slam on the brakes and I hit the back of a Thunderbird, which was a pretty big car back then and, uh, my car lost.

You had another DUI due to your co-morbid alcohol use?

And then you ultimately had a third, is that right?

And what were the events surrounding the, the last DUI caused by your co-morbid alcohol use?

I believe it was the night the Red Sox came back from 0-3 and beat the Yankees.  I was in Kissimmee and I decided instead of going home, I was driving all the way back from Kissimmee over to Cocoa to where my parents lived and playing golf with my dad the next morning.  And I never made it all the way out there.

You grew up a Red Sox fan?

What was the significance what the Red Sox did that night?

Yeah, it ended an 86-year drought of winning the World Series.

You weren’t the only Red Sox fan who had too much to drink that night?

No, I’m guessing not.  But I had Connecticut tags on my car and, honestly, you know, I’m going to say that I don’t think I was doing anything wrong but I was over the legal limit.  I got the DUI.  It got me in a lot of trouble and, uh, it led to me knowing that I can’t do that anymore and I haven’t even come close to doing anything remotely close to that any more.

Even repeated DUI arrests because of his co-morbid alcohol use, especially spread out over 20 years, do not necessarily show anything that would be relevant to a current assessment of neurologic function.  What is critical is what DJ’s day to day functioning prior to his brain injury was like.

We talked earlier about your running before the accident. But if you were a heavy duty alcoholic, that would likely impacted your running. Were you racing the year before you got hurt?

I ran right up until the time I got hurt.

So had you run any sub 24 minute 5 K’s in the year before your accident?

In the year before my accident probably not, but within two years, yes.  The Daffodil Race in Meriden, Connecticut in April, each year I ran, and I believe I had times in the 23s and 24s.

What other physically or cognitively demanding functioning did you do in the year before you got hurt?

I worked (Gaylord Palms). I was a waiter at the Sunset Sams.  It was a Key West environment, very upbeat, very high scale, I mean you could have $22.00 steaks, but we had stilt walkers, flame blowers and magicians.  It was a real Key West-type atmosphere, and I enjoyed it.

It was in Kissimmee.

Picture the cognitive challenges of being a waiter: intense pressure in terms of short-term memory, attention and concentration.  The stress of a busy dinner hour requires great emotional control.  The waiter who can’t remember, can’t hold his tongue, can’t increase his level of function as things get busier, will not last long.  Regardless of his co-morbid alcohol use that caused pre-injury, it didn’t seem to impact either his physical or mental functioning.