DJ talks about the support group that he started on Facebook for brain injury survivors called TeamHiLevel. 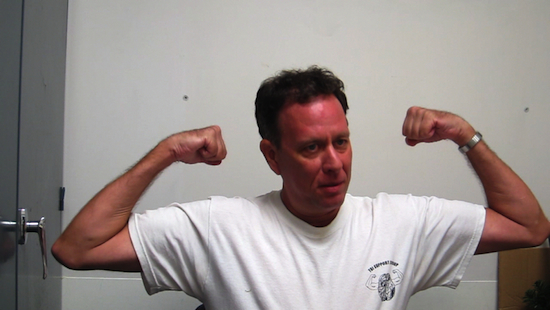 DJ shows how the logo for his TeamHiLevel support group was developed.

How DJ Started the Group TeamHiLevel

You started a network, TBI Support Group – Teamhilevel. Tell me about the group.

TBI support  teamhighlevel.  http://www.facebook.com/groups/teamhilevel/ Back in 2006, I was really tired of the negativity.  The stuff that was written about me.  The trash and slash way about going through, going about things that they were doing.  I said, “You know, why aren’t people positive?  We’re some pretty creative and smart people.”  And I bought a muscle and fitness magazine and I downloaded a blood red brain on a site and there was a girl at my second brain injury rehab that, when I went into her little room or whatever it was at the brain rehab, she had some incredible heart up there.

And, I said, you know, who did that?  You know, she did.  She had no use of her left arm and they can’t remove it because they said something about her right arm would, could grow to twice its size.

So, I said, Lottie, can you still draw.  She said, “Yes.”  I said, “I want this muscle coming out of this brain and I’m going to use it, create a logo or something and we’re going to make people understand.  You know we’re some pretty strong and smart people.  You’re an artist.”  You know?  And I don’t know what I’m going to do and I still don’t but I’m going to contribute at some point.  Maybe we’ll get some T-shirts made up(with the TeamHiLevel logo).

Well, there was a hydrocephalus walk in late 207 in Clearwater and I met Paula Kaiser and  her group and I brought  shirts made for the hydrocephalus walk and my strong brain and arms on the back and we had to come up with something and I had been writing team Dick and Rick Hoyt.  And, in their videos, I post them from time to time.  They’re amazing.  I mean, it’s amazing what they do.  And, so we came up with teamhilevel at the T-shirt shop.

And I said, “Boy, we’re onto something here.”  You know?  So, when I started Facebook, family and some of  my friends were like: “When are you going to get over this brain injury thing?”

I said they’re probably right.  These feeds (on TeamHiLevel) and all these links that I’m posting and learning about and shunts and hydrocephalus and they got to read about this stuff.  They got problems in their family, too.  So I saw a group.  There was several groups for traumatic brain injury on Facebook and I said, “I think it’s time I start my own group and then these feeds will absorb into that.”  And, it’s just grown.

How many member in TeamHiLevel do you have now?

This one’s once a month.

30 days is a long time support groups if you’re in crisis.

So, what is the value of having a 24/7 capacity with TeamHiLevel to get help when you’re online.

If it’s reliable, it’s invaluable.  I mean, we’ve got a young lady that’s dealing with a mom, schizophrenia, and she has her own brain injury and work and dog that just go hurt and blah, blah, blah.  But, uh, it’s amazing to listen to her deal with that and then it’s also amazing for her to say I’m glad you guys are online.  Thank you.

Or the lady that writes to me from Arkansas, Amanda, and says, “Before I met you, I never, ever got any help.  Not from the school system, not from insurance companies, not from hospitals.

So, advocacy, healthiness.  The IDEA laws, individuals with disability education act.  I didn’t know about that stuff.  I don’t have any kids.  I don’t have any disabled kids.  I don’t really know any disabled kids other than the, the one hydrocephalus.  But, um, you know, that mother is very strong and I don’t even have to advocate for her.  But, I Googled something like kids disability laws.  I mean, I’ve learned to be able to find things, idea laws.  Individuals disability education act.  It exists.  She took that to her school and said, “What’s going on?”  Kids’ getting’ home schooled.  He’s being moved to another school. What’s the value of having a 24-hour network?  We can talk about it at 3:00 in the morning.  We can talk about it at 1:00 in the afternoon.  We can talk about it after one of her meetings at school.  It’s available all the time and it’s easier than a phone.

There’s a bunch of different groups and I think they have their own character and I think mine is more – I don’t want to use the word – I used to word, use the word controversial.  I want to say teaching.  I think that there’s people in our group that are just willing, any time, day or night, to just let it rip.  Let their story rip whereas, you know, we talked about a situation yesterday where some lady came on and was saying, “I don’t want to give my information out to somebody I don’t know who it is,” and so some people got to be really picky about who they put in their group.

This is more of an advocacy group but we’re there for each other.  I mean, there’s people that truly care that I’m doing this because they know I’ve learned so much and been through, or been through assisted living.  I’ve been through workers’ compensation, going through Social Security.  You know, by the way, three and a half years of assisted living and a brain injury, family, money issues, settlements.

Somebody used the word so correctly lately: “layers”.  There’s more layers to a brain injury than there is a broken arm.  There just is.

Layers. The layers of brain injury involve the interplay of human thought, interaction and behavior – which come with an infinite set of variables, not reducible to GCS, IQ or neuropsychological scores.  To comprehend and assist those with brain injury, there must be the application of judgment, wisdom and experience.  It is through the experience of those who have gone before, that the most help is often received.  The challenge for the future is to find a way to add judgment and wisdom to that equation, merging survivor, caregiver and professional into a synergistic whole that can make a collective difference.