Trauma Center for TBI:Trauma System Fails Because of Hurricane

TBI VoicesTrauma Center for TBI:Trauma System Fails Because of Hurricane

When I first started work on http://waiting.com in 1997, I relied on some wonderful trauma center professionals for assistance in putting the site together.  I remember asking one trauma nurse, what she felt was the biggest breakthrough in saving those with severe brain injury, expecting the CT scan as the answer.  She said ” the helicopter”.

In the U.S. we have a trauma center hierarchy of care system that focuses the greatest amount of resources in a few Level I trauma triage centers, and assumes that anyone needing that level of care is air-flighted to that trauma center within a few hours. The faster someone gets to that Level I Trauma Center,  the better chance of survival.  In many cases only a Level I trauma center may  have the neurosurgeons available to do the surgery necessary to stop the killer that intracranial pressure will become.

The problem with our trauma system is that if air travel is disrupted, it breaks down.  And of course what makes that a greater vulnerability is air travel breaks down often breaks down when there are correlative to periods when there are great bursts of injuries, such as in severe weather events or other calamities.  DJ got hurt and the apex of this vulnerability, during hurricane weather, when all helicopter flights were grounded. 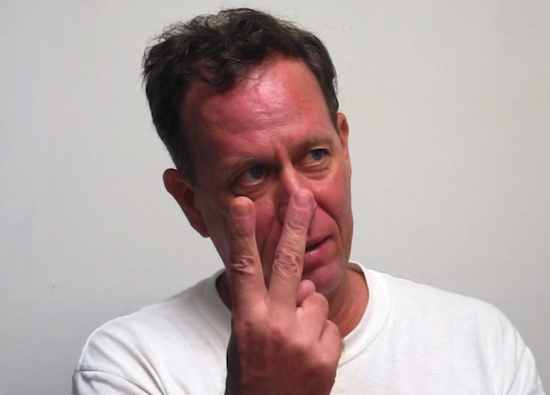 Trauma Center: DJ explains that he vomited in the CT scan around 2 a.m.

Let’s go back. It’s 10:30 p.m.you’ve called for the ambulance and you said the only thing you remember is the color of the ambulance.  What happened, what is happening to you in the next 12 hours, so your parents get there at 10:30 in the morning.

You only went to Cape Canaveral Hospital, you weren’t air-flighted to somewhere else?

I couldn’t be air-flighted because of the weather.

So, was Cape Canaveral a Level I trauma center?

No, because they didn’t have a neurosurgeon.

So what happens with, over time, that you’re in basically the wrong trauma center?

They call Titusville and they got a reply of either a bed, no doctor, or a doctor, no bed.  They got the same type of reply from Melbourne Florida Hospital, and then the trauma center in Orlando gets the majority of, in Florida, anyway I’ve been told, the head injuries, and they just, I don’t know, they didn’t want me to go that far.

They would have had to put you in an land ambulance?

Right, and then Daytona was called once during this time and they said it’s too far away.  They’re further from Orlando, and Melbourne was just south and Titusville was just north like the next town over both ways.

So do you stay in Cape Canaveral Hospital the whole time then?

To A Level I  Trauma Center?

Let’s talk about the injuries that you had.  You obviously don’t remember this, but tell me what they did to you, based on what you learned in terms of your injuries, the nature of the injury and the surgeries that they did.

Yes, I’ve read my medical records quite extensively and I always try to mention people should read their records, because you can’t just believe, really, what they’ve done.  But I read the operative report, basically they did a temporary shunt the morning and when my parents got there around 10:30 in the morning they said, and they were literally draining into a bucket.  I mean, this was super emergency, we need to relieve the pressure surgery. 14 days later then put in a full-time Codman Programmable Ventriculoperitoneal shunt set at 120 millimeters of water.

It’s the pressure setting for the shunt.  It’s a programmable shunt.  There’s different kinds of shunts, some have only one or two or three or four settings I think.  Mine has 15 settings, so they can be from, I think 30 millimeters of water all the way up to 180, and it goes in 10 increments, 10 millimeters of water, so if I’m getting very dizzy and vomit or something, my doctor can check the setting on my shunt and they can reprogram the shunt back down or back up.

You still have a shunt in you?

Let’s talk about, specifically, the only surgeries they did were, when they put the shunt in and then to replace it with the, the permanent one?

Well, immediately to put a temporary shunt in and, and relieve the brain bleed –

They didn’t do any additional brain surgery?

No, because it wasn’t physical damage to the brain, this was a big time bleed, because the first hospital I went to couldn’t open me up and relieve the pressure, so it was more of an compression.

Next in Part Four – DJ Before His Severe Brain Injury

While in no way a practical criticism of emergency medicine, each time I see coverage of a catastrophic disaster like Katrina or the Haiti earthquake, it is eminently clear that head injuries are likely high on the list of potential injuries, but there is clearly no way that any sophisticated triage for such injuries can be conducted during such periods.