TJ has been fortunate to be in an environment, in a family, a community, a support group that gives him not just support, but challenges that give him a focus, motivation,higher functioning after severe brain injury and out of the house. His medical staff were not very encouraging for him to use the right side of his body but TJ proved that he could with his higher functioning after severe brain injury. 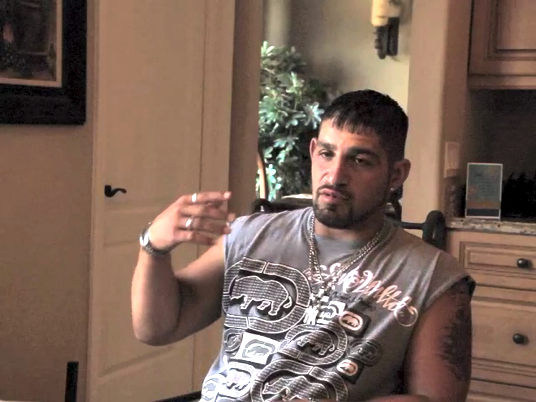 How often do you go, go bowling?

Are you in a league?

How good are you?

I’m not good at all.  If I bowl 100 I’m good because he (the doctor) told me I may never use my right arm again and that’s the arm I bowl with.

Why would you not be able to use your right arm again?

Because I injured my whole right side.

That was from the brain injury itself or from the crash?

Did you break your arm, or?

I dislocated my shoulder.

You don’t have problems with tingling or  loss of sensation on your right side?

You are using your right leg as well as your left when you bike?

Is your right leg as strong as your left?

Yeah.  I’ve worked it up toward it’s the same now.

Weightlifting Another Example of Higher Functioning After Severe Brain Injury

What do you do when you go weightlifting?

The guy I work with is an Asian.  An Asian man is my trainer.

What type of exercises do you do?

Weight lifting.  Bench pressing, back exercises and for arms, for back, for chest, then one day I do legs, shoulders.

How does your body work differently now than it did before you got hurt?

It don’t. Just that because of my balance issue everything’s a little wobbly, like when I try to bench.

How much are you benching?

How much did you do before you got hurt?

TJ describes his return to biking as just getting on and going.  Michelle remembers it a bit different:

He is able to bike.  That took a long time.  He did not get on a bike and was fine.  His balance was, it was several years after coming down.  He biked where it was up and down the street for a long period of time.  But yeah, he does, he bikes quite well.

Where you live is back in a pretty protected subdivision. And it’s probably a half a mile before you get anyplace where there’s any, really any traffic.

To ride to where he says he gets his hair cut and the gym is how far?

So for him to ride 10 miles a day would mean a couple of round trips?

I don’t know, I’d have to look at his speedometer to really know if that’s the true, of what he rides.  But I mean, if he’s going out of the development to the gym, that’s two miles up and two mile back.  TJ could probably if you put him on the bike in the morning he probably could ride until nightfall.  I mean, he just, he does things to the extreme, too.

Have you seen him in the gym?

Yeah he looks the part.

Something that is an option for future treatment for people with brain injuries is a movement towards personal trainers for higher functioning after severe brain injury. Personal trainers are less expensive than physical therapists and perhaps even available through organizations like the YMCA or other.

Has riding the bike itself created an improvement in him and increased his higher functioning after severe brain injury?

Yeah, because he has an independence so that’s, that’s definitely.

One of the issues that can occur, particularly with survivors who have neurobehavioral outbursts, is getting in trouble with the police, even if such conduct does not involve any direct violation of criminal law.

Has he had any brushes with the law?

What happened was, there was a, some break-ins in our community so they beefed up the law enforcement to come in.  So here’s TJ on a bike and, and he has a license plate that says “I’d rather be yelling bingo”, but anyway, the police officer stopped him and they asked him some questions, you know, his name and where he lives.

How did you find out about it, did the police officer contact you?

TJ came home and told me.  He did come right home and told me what had happened and then I was on the phone with the association president. To let him know and to let the police officers know, because TJ is in the neighborhood and, and riding his bike often and the deed restriction committee, we have to monitor our street and he has a street that’s his responsibility, and he takes that very seriously, so.

TJ’s responsibility of monitoring a street in his community and the pride he takes with this is a sign of his higher functioning after severe brain injury.

Next in Part Seventeen – Communication Issues Source of Frustration