Jeremiah shares with us his lyrical message of TBI in the songs that he has written and performs.  You can find these songs on the TBI website. 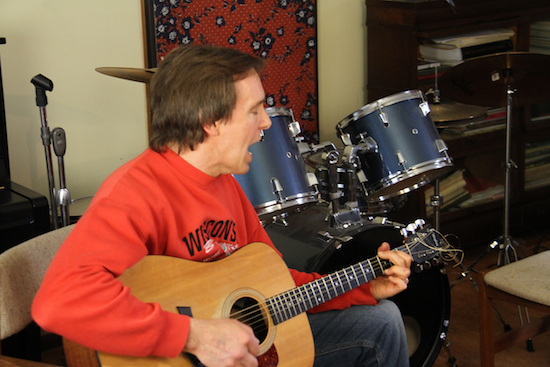 Jeremiah and his lyrical message of TBI.

As Jeremiah had to relearn to walk, relearn to play the guitar, he also had to relearn language after his severe brain injury.  Writing lyrics to songs and his lyrical message of TBI was as integral to that process as the guitar was to reusing his right arm.  Thus, messages about the cognitive, emotional and identity challenges he has faced are interwoven into the fabric of those lyrics.

Once before I thought I hadn’t had just what it took
Yet I still seemed to make both ends meet.
Be it seeking and finding, or just opening the right book,
I managed to end most days still on my feet.

And the days I could not
I’d stop to rest as I would need
So to work for what I’d got
And still have enough to feed
Others what my mind could say was right for them
If I only knew.

But now for me what’s in my past
Is only my perception.
Complex seem all the rules we cast
That garnish our direction
To ends we can’t undo.

Now, at time after, I found better may come still,
But from within such strength’s needed to fulfill.
Seeing consequence arise, out of all our circumstance
Means at times we must cut ties and possibly find new romance
With others who help us to give more of ourselves than we thought we could.
Find the ways to fix ourselves when we’re so badly broken.
Listen to words from those we love, so eloquently spoken,
To ends we would not undo.

Jeremiah talked to us about the meaning of that song and his lyrical message of TBI:

Let me think here.  I got to be a little bit to know whether – when I say something.  But, it’s a song that kind of reflects on what happened to me in a way.  It, it talks about how life was before things and how you don’t really have lots of control over things sometimes.

I think I used the word complex, basically, how complex things are in one’s life and yet, there are some things you can do.  The whole gist of the song is that we get a lot of support and, and – I can’t think of the words sometimes, but support and good feelings within ourselves and, and in – and ability to do things, even generated by the ones that we love.

We don’t always know – part of the song says how that sometimes we need to possibly find a romance.  And basically, that reflects on kind of anything, you know, like relationships, personal relationships and even physical things, work-type things.  Basically, how we live our lives.  That would be kind of romance, so.

Explaining the Fraud Justified song as part of his lyrical message of TBI:

I was fortunate within my brain injury that I recovered as much as I have.  I still have lots of difficulties and such, but most people say, well, they, they don’t know that I’m brain injury unless I tell them.  But, that’s kind of the way a lot of brain injury people are.  That’s what so frustrating about a brain injury is, is that people – and, and it’s a good and a bad to it which, which Gordon knows as well because you have – you need the help, but, but you like to look normal.  You like to be normal.

But yet you need the help and people lots of times don’t give the help.  That’s why the song for instance that we had to – this – the sort of rock song or whatever, that, that was about an actual experience of mine, the fraud Justified song, where I was disabled, you know, since 2003 and then, I had my retirement account, being watched over by somebody who supposedly was watching over it.

He was notified shortly after my brain injury of my difficulty and disability and such and yet, he kept me in the most aggressive funds and he ended up losing all of my retirement – tons of my retirement.  And, that’s what that song is about they think fraud  justifies.  So, in the title it’s got a question mark by it, Fraud Justifies.

And though that hurts, in little time,
The hurt heals and won’t have all

So you may stop, get yourself up
And find a good path to face those

Who believe they should get away
With devaluing what was yours.

Granite and chick cold key (say), “do believe”,
They can ruin you and then wander

The balance of Jeremiah’s songs and lyrical message of TBI are at https://www.youtube.com/user/TBIVoices