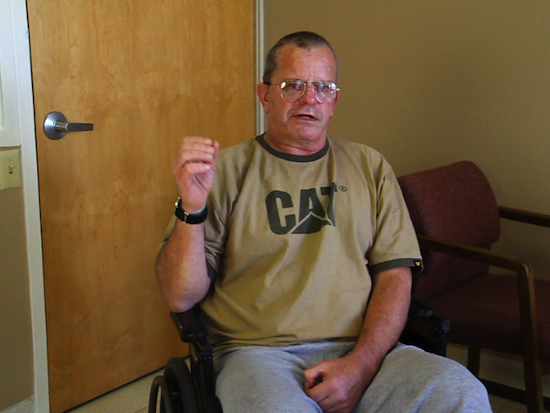 51 days, from September 1 until October 21.  October 21 he gets moved to Clearview Brain Injury Center for TBI rehabilitation.

Which is where we are right now receiving TBI rehabilitation?

Tell me about the last 40 days of TBI rehabilitation at Saint Vincent’s.

They had him in the rehab.  He got moved to the rehab floor where he had occupational therapy, physical therapy, speech therapy and he started to talk, maybe a month after he woke up. He had left neglect really bad where he didn’t focus on the left side of his body at all, you know?  He would try to wash himself up and it would just be the right side.  He would never go to the left side.

When you say neglect, you’re talking about his entire side of his body?

Yup, the entire side of his body, like he didn’t have a left side of his body.  He had just a right side.  They tried to walk him in therapy.  He couldn’t even sit up. He really couldn’t do any of that in first 51 days that he was there.  They worked really hard to try to get him to do things as far as moving his left side and he didn’t move it at all when he left there.

I actually, I asked the doctor and the doctor’s nurse if they ever thought he would move the left side and they said no.  He probably wouldn’t do it due to the part of the brain that they took out.  And I just said that’s,  that’s okay with me and it’s okay with our kids.  It would be okay if that was the way it was, we would take him any way that we could have him back.

He begins to communicate before he starts to speak?

Describe that for me.

We could ask him things like if he wanted something and he would shake his head yes or no.  He had to have like a diaper, he couldn’t go to the bathroom by himself.  I don’t know, he never really would tell us if he was wet or not but they, they tried very hard at Saint Vincent to make him better.

I was actually hoping that as long as he was at Saint Vincent I was hoping that he would be good enough when he left there to go home and then they told me that he couldn’t go home.  He had to go to a brain injury center (for TBI rehabilitation) and the day he left there, the 51st day, I cried for two hours before we left there because I thought he was going to be able to come home.  Realistically I didn’t think of all the needs that he needed, things he needed to do to try to take care of himself and it was too much for me to, to take care of him the shape that he was in ’cause he couldn’t even sit up.

Let’s talk about him learning to talk again during his TBI rehabilitation.

He had a trach and he would try to talk but nothing would come out so because he just couldn’t talk.  He tried to.  So then they decided they were going to put a cap on it so they would like put their thumbs over it so you could kind of hear what he was trying to say.

The day they put the cap on there, probably for the week before he left he was starting to talk some and that was by when you would hold your finger over the, the trach, so you could kind of hear what he was trying to say and it was normal talk but it was at a very slow pace.

This would be the end of October?

Yes. (He left there on) The 21st.  So about the week before he left, and then actually I think he wanted to talk so much that he pulled the trach out himself while he was in the bed.  They went in there and it was out and he could breathe on his own and everything so they just left it out.

What type of awareness did he have during this time- how aware was he of what was going on around him, why he was there, what happened an hour before, a day before as he’s leaving Saint Vincent’s?

He actually thinks he was there in the hospital.  At different points you would ask him where he was or what happened to him and he would say that he was in a nursing home in Crivitz.  He was in a hospital but he didn’t know the name of it.  He thought for months that he had gotten hit in the head with a chainsaw because he did use a chainsaw once and a while at work.

I met both of you a couple of months ago. And at that time he told me that story.

When did he start to realize it wasn’t a chainsaw?

Probably just a couple, probably just two months ago, after we had seen you.  I didn’t bring it up a whole lot.  I would say what happened to you and, you know, he went on about that chainsaw thing and the only thing I can think of is that day that that happened when he was home he maybe trimmed his load off with the chainsaw and that’s the last thing he happens to remember.

It is another example of the confabulation we discussed at length in the Lethan story, http://tbivoices.com/lethan3.php

I also asked Mike about the chainsaw story:

How did you realize that that isn’t how you got hurt?

Because the injuries didn’t match to a chainsaw blade.