Neural Exercise of Music: The Benefit it Provides for Recovery

TBI VoicesNeural Exercise of Music: The Benefit it Provides for Recovery

People often think of brain injury as only affecting thinking and emotions, those behaviors that occur inside the head.  Yet, brain injury, as it did with Jeremiah, often impacts the entire nervous system, because the nerve impulses that make a hand move, a foot tap, the heart beat, originate inside some portion of our brain.  An obvious example as we will see in our later interview subject Mike, the removal of a significant proportion of the right side of a brain, can leave severe right sided disability throughout the body. 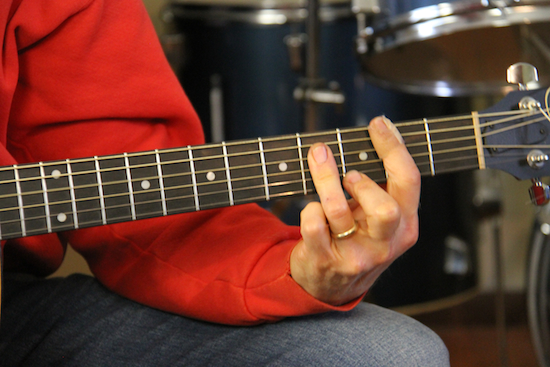 Jeremiah makes chords with his stronger left hand in using neural exercise of music in his recovery.

While Jeremiah didn’t have that type of injury, the pathways that route the signal from the gray matter of the brain to the muscles was likely damaged.  Not many years ago the belief was that such axonal damage was irreparable and little could be done to regain such lost function.  But as more and more people survive what might have been fatal brain injuries, we are seeing more and more people regain functions that were thought to be permanently lost.   What we are learning more and more – with each scientific study, each unique survivor is that the brain has great “plasticity”, the ability for remaining cells and neurons to take over the task of dead or damaged cells.   Yet to achieve maximum regeneration of neural pathways, it is essential that the brain gets extensive and progressive neural exercise of music.

Music therapy has been important in therapy for as long as we have had legends and teachings about healing.  Yet traditionally, music has been thought to be therapy more for the soul than for the development of neural pathways.  In Jeremiah, we can see neural exercise of music  having a profound physical as well as cognitive impact.

I had to relearn, yeah, a lot of that, yeah, the chords.

Ideally you pick with your fingers and I don’t pick with my fingers because I can’t.

You were just doing it but is it hard for you to finger pick?

Oh, that isn’t finger picking.  I’m, I’m picking at it with one – I’m moving each finger but I’m not coordinating at all. I can’t coordinate. 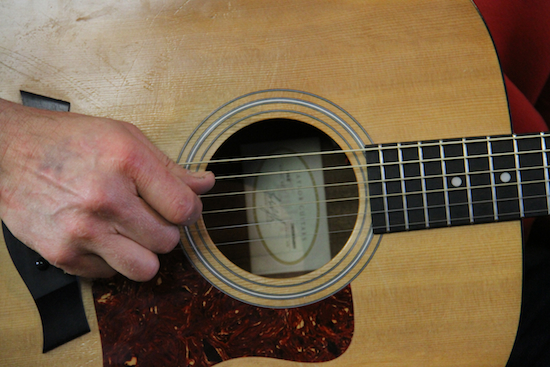 Jeremiah does some finger picking with his weaker right hand when using neural exercise of music.

Right.  Well, I wrote those so that’s – but you do have to remember them each time you do it and that’s one way it helps.  This, this is a way that music, I believe, helps people.  For instance, people who have had strokes that cannot walk I’m told can dance sometimes, who cannot speak can sing.

Now here’s something that I thought of but say, for instance, you, you can’t add.  Maybe you can add by musically somehow or, or mathematics musically somehow; I don’t know but, you know, there’s – what I’ve learned is that music affects many areas of your brain.     I believe that music does link many areas.

Jeremiah mentions that neural exercise of music may use a different part of his brain to sing words versus speaking them.  There are many traditional theories about where music occurs in the brain, but most of those theories pre-date FMRI.  FMRI (functional MRI) can in real time, tell us what part of the brain is working when given a task that can be performed inside an MRI tube, during the imaging process.  Traditionally most of what we knew about what part of the brain did what was determined from neuropsychological testing and experiments, with a great deal of that theory postulated from individuals who had surgically removed portions of the brain.   While it might be possible to conduct an FMRI experiment involving some musical functions, the necessity that the head remain motionless while that activity is occurring makes such a study difficult.  The more active the musician is in making the music, the less likely that FMRI will give us satisfactory answers.  While humming might be possible, singing which requires a singer to move the jaw, might involve too much motion.  Only limited play of musical instruments seems possible while prone into an MRI machine.

How hard was it at the beginning to use neural exercise of music in coordination, versus how it is now:

It was extremely difficult.  First of all the guitar I was using was such difficult to press the strings even down and, and it hurt my fingers and though I can’t feel as much in my body for my partial paralysis it hurts still or just even maybe more.  To learn that was very difficult, to learn how to coordinate different parts of your body and then just to play the guitar and then you want to put your singing in with the guitar.

To sing and play a ballad on his guitar, requires him to remember words which is different than remembering chords and may you use a different part of his brain and also to coordinate his vocal cords.   I asked him if he had a  trach or any damage to his vocal cords:

I didn’t have a trach ever.  Well, I imagine with the paralysis – I can feel the difference in my head and leg and arm so I would guess – and, oh my mouth too.  I lost taste. I lost of every sense, every sense and so my face and the eye right here even so I would guess, you know, things are different.

Jeremiah is a unique story with respect to his neural exercise of music because he not only plays music but writes it.   Another question for the brain localization scientists will be where is poetry written and how different is that function from the normal use of vocabulary and speech. Jeremiah used rhymes to help his memory of people’s names:

I figured out ways to try to think of their names, but it was typically with a set of a rhyme so put everybody’s name together or in my prayer at night, I’d have to think  through it, if I’d see one of my people I didn’t remember their name.

It was this use of rhymes to help his memory that started his flirtation with lyrics, which has lead to his songwriting.

Next in Part Seventeen – Making Music with Jeremiah