It had its ups and downs in there. There were some things in there that, I was like, “Oh, I can do this,” and then you went and tried to do and no, you can’t. Swinging a hammer, turning a screwdriver, putting a nut on a bolt, writing your name or a letter.

It was – I, I could remember how I did things in my mind, but trying to get my hand to do the application, I just, I just couldn’t get the two to correspond. 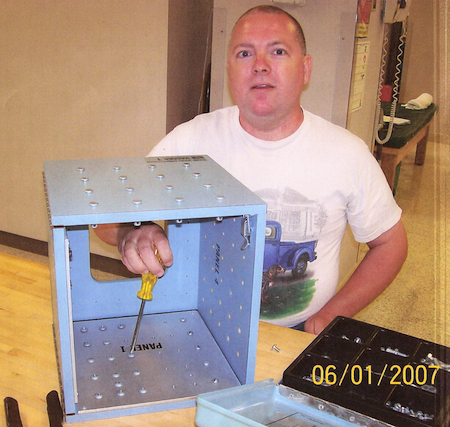 Ian shares his experiences with rehab for severe brain injury.

Yeah, that’s part of the occupational therapy. Those pictures were taken when I was out of the hospital. I’m trying to basically put a screw in.”

Describing his therapy during rehab for severe brain injury:

Swing a hammer, write your name, write a letter basically; put nuts and bolts together, try and turn a wrench. Oh boy, I’m trying to remember everything. Doing, working out on a weight machine, trying to move your arms and legs. (I got outpatient therapy) until about maybe mid summer, early fall of that year. I had speech, occupational and physical.

What limitations do you have now with respect to the right side of your body?

Strength is the biggest issue, running, throwing, stamina in certain areas. I just, I might do something for a little while or try to do something strenuous so, so to speak, and I might be able to do it and other times I can’t. And all I know is either that afternoon or for the next day or two I am just tired to the point where if I’m sitting in a chair watching a TV show, I’ll fall asleep for no apparent reason at all.

Ian’s friend went with him to some of those therapy sessions during his rehab for severe brain injury:

They were doing stretches with his legs mostly. His whole right side had to be retrained. He had some pressures on his left side. When they finally let him go home and I was taking him back to rehab as an outpatient, he was getting around but very, very slowly. So they were really trying to help him to be more independent again, get him off the cane and all that. He didn’t complain about what he had to do. I didn’t hear him screaming because they stretched him or whatever, you know, he just, he just did it.

When he first walked I actually, second time that he walked I got him on video and this – he had a nurse on each side. He walked from what you might call the waiting room but the nurse’s desk in the front and he would be like maybe three or four doors down. So he would walk from where he sat there all the way and they would help him up but he walked with his own legs and he was smiling some of it because he was getting around. Some of it he was getting tired and I’d say come on just a little more, a little more, you know. But it was good to see him at least starting to get around.

When did he begin to walk during his rehab for severe brain injury?

Well, they wouldn’t let him go home until he could walk so it was within that seven, eight-week period. I don’t know, I’d probably say about the last two weeks maybe before he went home that he really actually was able to start moving around.

Did his memory started to improve then, too?

A little bit. He started recognizing people and putting names to faces but it took him a while and that included family members.

How long did it take him to know you?

Next in Part Five – Ongoing Right Sided and Balance Problems