For Mike and his wife, recovery from severe brain injury and coma has been a partnership, a partnership that all those impacted by  TBI can learn from.  To conclude our Mike story, I turned to Mike for his words for other TBI survivors: 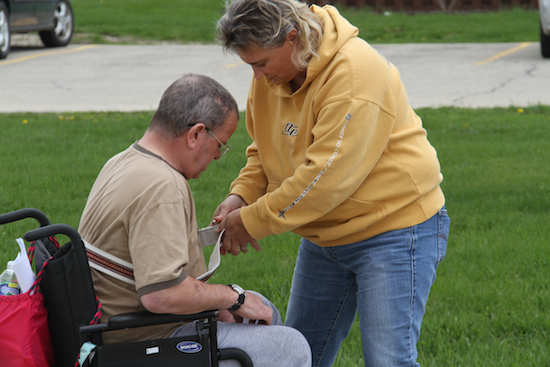 Mike’s Partnership and Words for Other TBI survivors.

Words for Other TBI Survivors Mike Would Like to Relay

It’s very hard to get back to where you were, rehabilitation and all of that.

What’s the hardest part of the rehabilitation?

You’re practicing everything so you get back to normal.

How’s your attitude about it, good?

I think it is, yeah.

There were a couple of times when we were interviewing your wife that you got very emotional.  Are you having times when you’re very sad about this?

What is it that makes you sad?

I don’t want to think about it too hard.

Well we very much appreciate that you, that you did this for us because we know it was hard and maybe we should have interviewed your wife without you here.  What was it about what your wife was saying that made it sad?

Just because she’s trying too hard.

You love your wife very much.

You certainly know that she loves you.

Anything else you want to add to people who may need a cheerleader or a voice of encouragement or to the other wives who are having to think about what to do when their husband’s in a coma?

Are you going to get your life back?

I’m working at it.

I asked his wife:

Are there any other words for other TBI survivors  that you may want to share about what you guys have been through in the last eight months that might be able to help other spouses with that waiting, that fighting back with the doctors tell you there’s no hope?

Just a lot of hope and prayer. You know, we’re not big churchgoers or anything but I believe there is a God above and he will take care of you and everything happens for a reason.  I believe that and life is good if one doesn’t weaken. I believe that and I would say that every day to myself.

For Mike, even though he doesn’t remember his accident, clearly didn’t do anything wrong that caused the accident, the regret that something as innocuous as stopping at the neighborhood bar caused his wife so much heartache, lingers:

Its not worth it at all.  I could change that day that I had that accident, I’d never went to the bar on my four-wheeler to drink a beer, that was where I made the biggest mistake of my life.