Michael and I talked about the partial paralysis he suffered because of the accident and whether it was caused by his traumatic brain injury.

You have tingling in your left arm because of you brain injury partial paralysis?

Yes, I get that all the time.

Tell me about that.

Well I’m right handed and I’ll be sitting watching TV or even walking and I have a nervous habit to where I go like this because I can’t sometimes feel my fingers and that drives me kind of, well but there’s nothing my doctors or any of the doctors I’ve seen can do about it.

Were you right handed before?

Did you know how to type before you got hurt?

Are you able to use your left hand well enough to hunt and peck with it because of your brain injury partial parylysis?

I can’t use it very long because it’ll go numb.

What else makes it go numb?

When I hold it up.  When I have it on angle like this, it’ll start to go numb so I have to shake down.  That’s mostly or when I put, when I sleep on it it’ll go numb and I’ll wake in the morning and I won’t have any feeling in it.

Where else in your body do you have weakness or this partial paralysis?

Well I have a huge weakness in my legs. I sometimes they get so bad I, I still use a cane.

Are you using a cane today?

No, I didn’t have my cane today.  Actually, I’m doing really good with my legs.  Usually when I use the cane, it’s in the fall and then all winter.

Do you remember relearning to walk with your brain injury partial paralysis?

Bits and pieces.  I remember, like I said, those bars I had to walk through and even after I left Elizabethtown and came up to Louisville and had outpatient therapy, um, even then, um, that was one of the big things and I, I had a really hard time on the steps.

Are you able to go up and down the stairs now?

It takes me a long time.

Now we’re on a lower level of the library here.  Is there an elevator that you could use?

There is, there could be an elevator I could use.  I just held on tight with both hands and walked down.

Look for the elevator on the way up?

What about relearning to walk after your brain injury partial paralysis?  You told us that you remember the parallel bars.

I remember I had a walker for a while and that, I definitely asked them not to put wheels on it, they put them regularly.  And then I went from a walker to a four cane and then I went to a single cane.  I still use that off and on, especially on, I’m very sensitive to weather now.

Today you came here without your cane?

There’s some stairs that you had to come down to where we are holding this interview. What was that like with your brain injury partial paralysis?

That was hard.  I had to, uh, really concentrate because it’s easier going up for me than going down.  I really had to adjust my weight and kind of lean back. 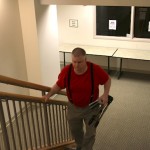 Michael is able to walk up the stairs even with his brain injury partial paralysis. 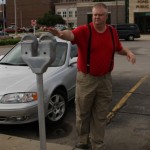 Micheal arrives today without his cane but you can see some of the weakness in his walk because of his brain injury partial paralysis.

Next in Part Seven – Vision Problems Secondary to Brain Injury